Going under the knife: ‘They thought they were going to lose me’ 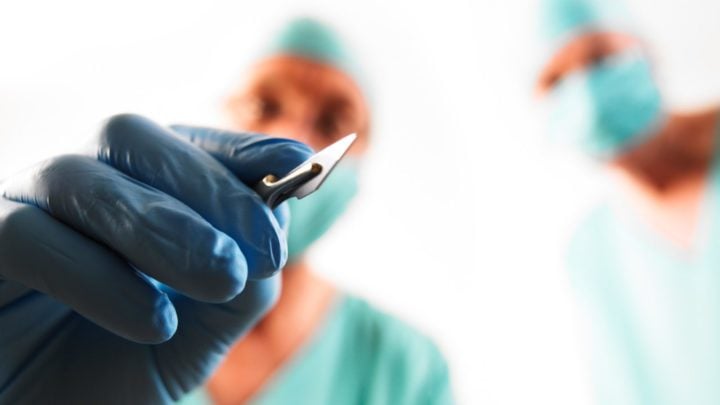 I had been feeling a bit unwell for several weeks, with a gradually increasing pain in my abdomen and a distinct loss of appetite, but it was one of those things I’m sure we have all experienced, where you think, “I don’t feel so good, but bugger it, life goes on!” and you try to ignore it. I suppose, in retrospect, I would have been better served if the discomfort I was experiencing had settled itself conveniently at the lower right of my stomach, but unfortunately it was more general, spanning the whole width, almost from hip to hip. And, of course, at the early stages it was nowhere near as painful as it was to become, once the bursting damage was done!

Things started to heat up on June 19, when the pain suddenly became distinctly more severe, though still not focused to the area of my appendix. I really knew then something was, at the very least, not right, and I got my wife, Jacqui, to ring for an ambulance. Unfortunately, the paramedic, after quite a detailed examination, diagnosed either indigestion or a blocked bowl and she advised me to visit my GP the next day. It took another two days before the pain became very much more acute and actually started to settle itself in my lower right abdomen, forcing us to call for an ambulance once again.

It was obvious now that something very serious was wrong, though peculiarly, all my bodily signs, temperature, oxygen levels, blood pressure, etc., were all showing normal. Anyway, this time I was given a healthy dose of morphine to ease to terrible pain I was suffering and I was whipped off to Latrobe Regional Hospital, about an hour’s drive away. I don’t really remember too much after that, just almost photographic images of arriving at the hospital and being transferred to a ward somewhere, being asked a lot of questions, to which I hope I answered sensibly in my drugged state, being prepped for a major operation, and waking up, many hours later in a small ward, pipes sticking out of my nose, various points on my arms, and two bottles on the end of plastic tubes emitting from my stomach.

I was off the planet for about the next week, full of anaesthetic drugs; and morphine I could pump into myself whenever I felt I needed it. I had weird dreams, which I can’t recall in more than the slightest detail now, I was inclined to get out of bed and wander if I wasn’t watched, and worst of all — I was given no food at all, apart from some thin ‘soup’, which tasted as if it had been prepared in a petrol can. I was also passing all sorts of weird things via my various bodily orifices, some of it not under my proper control at all, (need I say more?).

To return for a moment to the day of my operation, (June 22), this was also the day of my wife’s 80th birthday, for which we had been organising a great party for some months, a party that Jacqui wanted to cancel, due to my problem. What she didn’t know (but I had for six months), was that our daughter Kerry who resides in England, was coming out especially to surprise her, so before going off to the hospital, I had to convince her, without letting the secret out, that the party really had to continue. So many were coming, from various parts of Australia, and they would already be well on their way to joining us. I said, whatever happened to me, she might just as well go ahead and enjoy herself — the time to change would be if something disastrous happened to me. Luckily it didn’t, though I have to admit now my surgeon told me after the event, that they thought they were going to lose me for a while, but I pulled through, as this blog attests.

That is the story of my seven-week adventure, which is still going on now, and apparently is going to continue for several months yet. At least the VAC pump I was fitted with, which drew off fluid from the wound in my stomach was taken out recently, and I feel immensely better because of its demise. I’m still weak in the legs for some reason and of course I get the occasional twinge in my abdomen, but the medical fraternity seem quite pleased with me. I’d have to say how nice it is to feel like writing again too, I’ve had no interest since the op!

I have been told that I must just take it easy for a few months, don’t lift any weights and eat plenty of good food — what a great excuse for a lazy old idiot like me to do nothing for a while!

Have you experienced anything like this? Have you required emergency surgery?