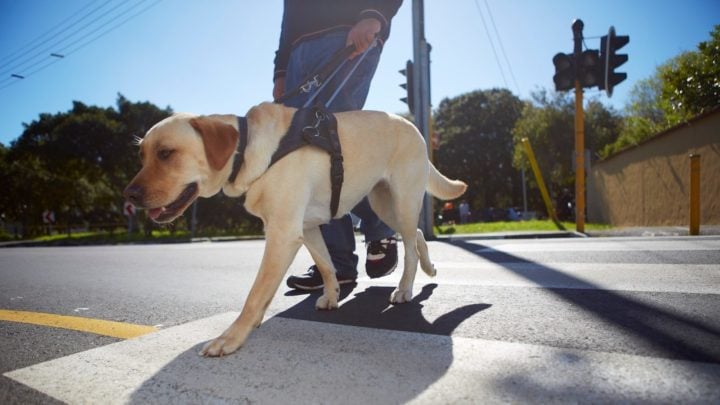 Peter writes about his encounter with a guide dog. Source: Getty Images

This is a true story. Seeing-eye dogs are much sought-after when they have finished their life’s work, as they are so intelligent and so well-trained. I would love to have one.

At 6:50am I was waiting in my car outside the office of my local pathologist. You know, the people who take a sample of your blood, send it away to be analysed by subjecting it to a zillion tests, then let your doctor know what is wrong with you. I have had many such samples taken. At my age, my doctor and I are on first name terms.

The sign on the outer door indicated it would be opened at 7:30am. I was early. The early bird might not catch the worm, but he or she certainly catches the number one patient card, gets their blood taken first, then gets home for breakfast. I was hungry. And my coffee count must have been low.

At 6:55am a guy in a Mazda pulled up in front of my car and proceeded to reverse into a space just ahead of mine. I casually stepped out of my car, locked it, and commandeered a position beside the door of the pathologist. Such positions are to be defended at all costs. The guy (should I call him a ‘bloke’?) approached my position. His look said “How dare you get here before me.” I managed to look just a little smug. No words are exchanged. The atmosphere was literally and figuratively frosty.

At 7am, a red-headed woman stepped out of her car, crossed the road and stopped next to me. “Are you first?” she asked me. I nodded. She knows the drill. She looked at her watch. It would say 7am. Half an hour to go.

Another five minutes passed. No one spoke. Then a maxi-taxi pulled up and an elderly man got out. He unfolded a white cane and prodded the footpath with it. Then an equally elderly woman slid out of the far side door, walked around the taxi and opened the rear door. She led a beautifully kept long-haired Labrador out of the vehicle and handed the harness to the man. Her husband I presumed. She paid the driver with a voucher and the two of them — or more correctly the three of them — approached the door of the pathologist. They stood with backs to the brick wall.

“Sit,” said the owner. The dog immediately sat at his right side. The silence continued.

“Would you like a seat?” I asked the man, for he looked a little unsteady. I had been sitting on a blue slatted seat next to the door.

“No, I’m all right.” Independence.

I turned to the woman. Her appearance showed the ravages of many years of struggle. “Would you like a seat?”

“No, I’m fine, thank you.” Once again, independence.

I stood any way, and walked over to the dog. I almost reached out and patted him. “You don’t pat seeing-eye dogs, do you?”

There was another pause. Then the blind man said, “You know, you are the first person I’ve come across who has called him by his correct name. Nearly everyone else calls them guide dogs, but you can have guide dogs for hunting and searching for lost people. This is a seeing eye dog.”

I was glad I had got that right.

“He sleeps on a mat at the foot of our bed,” said the woman, “and follows Bill around the house all day.”

Ah, so that was his name. The man, not the dog. It was the first time she had said much at all. “His name is ‘Hero’,” she added.

“What about a restaurant?”

“You know it’s against the law to refuse entry to a seeing-eye dog, don’t you? There’s a very heavy fine.”

“Hero would be no trouble.”

The dog’s ears came to the alert position, as if waiting for a command. He looked up at his master.

I was keen to find out more. “How long have you had him?” I asked.

“Five years. He should last me another three.”

I could not imagine the day that dog and master would be separated. A canine version of Sophie’s choice.

“Where will he go?” I had visions of dog pounds and horse knackeries.

“To another owner. My bank manager is first on the list.” There was almost a sob in his voice.

I wished I could be second on that list. Or maybe moved up to first. Being local, I could visit Bill and show him how well his dog was doing.

At that moment, the woman who opened the office appeared, smiled a good morning and opened the main door. There was almost no pushing. Almost.

I hastened to the box where they kept the patient queue cards, and grabbed the number one. And handed it to the blind man.

Do you know someone who is visually impaired?