‘Growing up good: Two occasions where it paid to know the bad guys’ 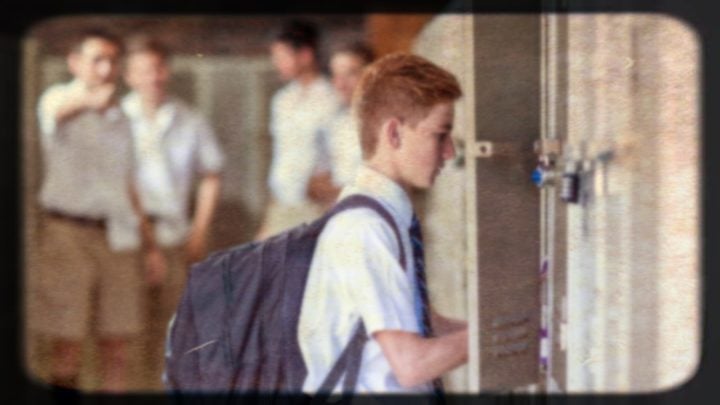 There was a threat that Roz's son would be beaten up by a gang, but he feel in with the 'right' crowd in the end. Source: Stock Photo/Getty Images

My sister had two boys and two girls. They were all very different to each other. The younger boy was a bit wild, while the other one was very conservative. The wild one dropped out of school and got in with a rough crowd. The other boy was a good boy — he excelled at school and played cricket.

When he was a teenager the good boy accidentally cut off a group of boys in his car one day. It was pretty late at night and the carload of hoons followed him and eventually made him pull over. The five boys all got out of their souped-up old car and started walking menacingly towards the good boy.

He was absolutely terrified. There was no one around and he thought they would beat him up and vandalise his car. When they got really close, one of the boys said, “Oh it’s Dan’s brother, Ben.”

The group of boys all turned and walked back to their car and Ben breathed a huge sigh of relief. At that moment, he was so happy Dan was his brother.

Years later my son had an incident at school. We had moved to Brisbane from north Queensland and my son had to start a new school in the middle of Grade 9. It took him awhile to settle in and make some friends in the large high school.

One night at home he was very quiet. I finally got out of him what had happened. He said he had been gossiping about one of the girls at school. Someone had told him her boyfriend had hit her. He got the story wrong when he was spreading it around and was telling people it was another girl.

That girl was Chinese and when she heard about it she called in a group of her Triad gangland friends. They were waiting for my son on the bus stop with knives.

Luckily my son had made friends with some tough Maori boys who were in Grade 12. He went into the takeaway shop near the school to avoid going to the bus stop. The Maori boys were in there and asked him what was wrong. When he told them they walked with him to the bus stop and waited with him until the bus came. The younger boys from the Chinese gang didn’t try anything.

Later that night a lot of my son’s friends who had heard about it were ringing him to see if his parents were going to go to the police. I said no. I told him he needed to go to school the next day and apologise to the girl and that he should never gossip again.

He did go off nervously to school on the bus next day, found the girl and apologised. She accepted his apology and he never had any more trouble. He also learned a good lesson — not to gossip.

In both these examples it paid to know, or be related to, some of the tough kids.

My two nephews and son grew into what I would consider lovely responsible young men. The younger nephew did go back to university years after dropping out of school and graduated with several degrees. He now has a good job. My son is happily married with a gorgeous son and gets on well with people from all backgrounds. I am very proud of him.

Have you ever had an occasion where knowing the 'wrong' people was the right thing?