‘Our beloved dog died protecting my husband from a deadly snake’ 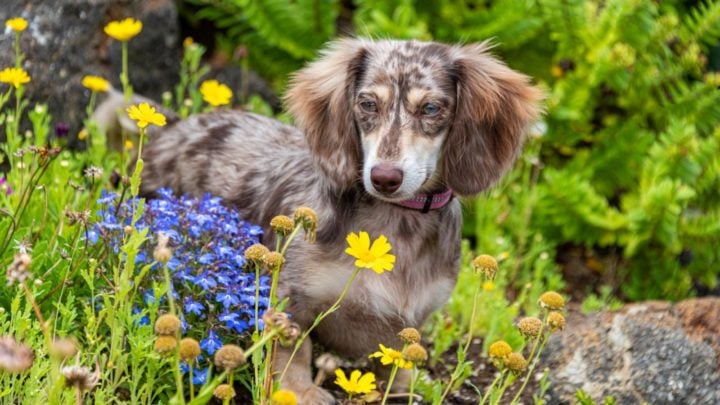 Linda mourns the death of her dachshunds, especially Helga, who saved her husband from a deadly snake. Source: Stock Photo/Getty Images

My adult daughter bought me a dachshund 17 years ago as a Christmas/birthday present. As a child I grew up with dachshunds in the family; they were always a dog I loved.

Co-co was my baby. All my children had grown up and she had replaced them in some way. She followed me every where I went, she was well trained and obedient, and she was the perfect fur baby. I am sure she had a sense of humour as she use to plonk her head on my computer keyboard when I was typing and almost seemed to smile when she had completed her task.

She was a black and tan miniature dachshund and everyone loved my small companion. When she passed away (at the ripe old age of 17) I though my world was going to end. I cried for days and honestly felt broken. She passed away in her sleep and we put her to rest under the frangipani tree in the front yard.

I had another dachshund. He was a rescue and we named him Schnitzel. He was lost as well without his companion.

My husband and sister were so worried about me they brought me another dachshund puppy, named Weenie. My grandson thought the name was funny because if Pa was outside calling the dog hearing him say, “Weenie, Weenie! Have you seen my Weenie?” made him laugh.

Weenie was a red dachshund. He was soft and squishy and just a delight. He would never fill the huge hole Co-co left but he helped. When Weenie was six months old we came across another litter of dachshunds that were black and tan and they had a female left from the litter, so we brought Minnie into our lives.

Having three dachshunds was a treat! They could all do tricks and were great fun to have in our family.

Not long after Weenie turned one we noticed he was having seizures, small fits that lasted several minutes. We’d hoped to breed dachshunds and the seizures meant Weenie couldn’t be a part of our breeding plans.

We contacted the breeder of our Weenie and she told us she’d just had a baby and that she had a two-year-old female she needed to find a home for. Into our lives came Helga. She was a dapple mini dachshund and she fit right into the family, no problem.

We had found a male dachshund to breed with her and she had come into her first season with us, when she was bitten by a snake. She died a hero. Helga saved my husband from stepping on a brown snake he had not seen in the yard. He saw the grey blur that was Helga in the corner of his eye as she flew out of the shadows and grabbed the snake and shook it to it’s death. The snake bit Helga inside her mouth and she died in my arms as we rushed her to the vet. Another blow in my life of dachsunds.

After all the heartache it was hard to adjust back to life with out her. Helga and Co-co lie side-by-side under the frangipani tree. When I sit outside and drink my tea I sometimes cry for them both. I am thankful Helga saved my husband and I am sure Co-co and Helga would have been great friends if they had met.

Helga’s death was tragic but she died knowing she was a much-loved member of our household.

Have you ever grieved the death of a family pet?