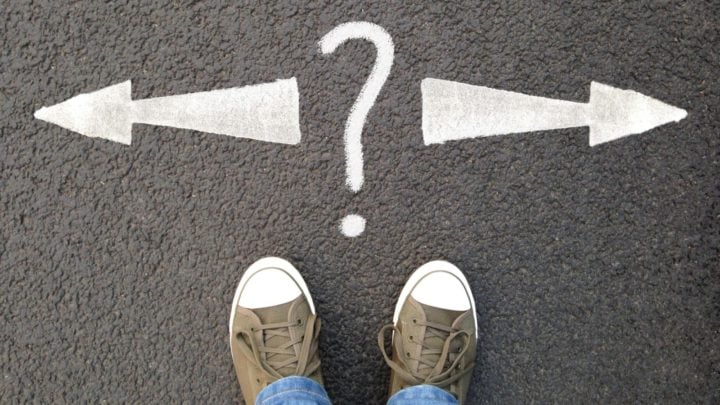 It's all a matter of choice, isn't it? Source: Getty Images

One of the most difficult things about growing older, I find, is facing up to the choices one made along the way. And I’m not talking about the eggplant dish you bought at that Greek restaurant in Castlereagh Street in 1981 that laid you up for four days. More to the point, this is about the pivotal choices one makes about, say, a change in career, dating back to the year dot in some cases, or they can be choices about a life partner. Both of these, few will disagree, pretty well define a life at its very core.

There are others of course, almost as significant, that can set a template for how our lives subsequently unfold. I am reminded of an elderly gentleman I once knew, now sadly deceased, whose life was defined by a 40-year-long bout of brooding over a row of Victorian terrace houses he was offered for a song in the ritzy Sydney suburb of Woollahra. It was an offer that he abruptly declined, convinced that Sydneysiders were so infatuated by the post-War, post-Depression modernism of the 1950s that they would never again want to live in 5-metre wide, single-fronted, gloomy, airless boxes without off-street parking. Say no more.

Generally speaking, however, there are always opportunities to change course, if one has the self-awareness to recognise them. I say this as I watch Number One Son complete his honours year of his undergraduate degree, in the knowledge that he will begin studying for his PhD early next year. More than the pleasure of watching someone very close to you reach that satisfying moment when a real test has been met, what really intrigues me is even closer to the bone.

Unlike his father, Number One Son is a specialist. While he has a very deep interest in the world around him, the educational course he chose is vocational in a way that would have been unthinkable to either of his parents, generalists through and through, when embarking on their life journeys. So, I understand the belated confusion of those generalists who did follow their intangible dreams, and I hear the muted lament about all the missed opportunities that would have resulted in outcomes very different from the bleak ones many face in these more stringent times.

But I ask myself, very privately of course, will a specialist like Number One Son have his dark night of the soul should he be confronted, eventually, by a brick wall; will he suspect that the small light he can just glimpse in the distant past might possibly have offered a different, and more fulfilling, path to a better present?

So what does a 50- or 60-something do when they awaken from that dark night of the soul and everything in them screams that they can no longer live with the burden of choices once taken that have since dried up to become a scorched desert stretching out before them?

I am reminded of two quite different instances with two quite different outcomes. A professional man in my former locality was, I suppose, unhappily married and had always regretted the end of a relationship when he was much younger. No longer willing to find solace in the bottle, he tracked down his former lover on the net and learned that she had become a teacher, married, living and working in a small town in rural New South Wales.

Throwing caution to the wind, he went to our local green grocer, bought the largest apple he could find, waxed and polished it, and then posted it to the school where she was working. “An apple for the teacher?” was the only question his enclosed note said. But to his surprise, she responded and, to cut a long story short, they made contact, threw away all their other obligations, and had five delirious years together before my professional man passed away.

On the other side of the ledger, another friend decided to take heed of all the glib blurb of the media and retrain for the digital age. She did outstandingly well in her IT course at university only to find, on graduation, that the jobs she had aspired to when she first enrolled were now filled by 457 visa holders, or had been off-shored, or had been abolished, or were just a nasty joke at everyone’s expense. She is now working as a booking clerk, with lowered horizons to be sure, but more accepting of the extra cash she puts on the family table each week.

I am certain that there is no golden rule in all this. It’s a gamble and there is never a guarantee that anything new ever pays off. After all, the creators of all those didactic little proverbs we learned from our parents always (cunningly) ensured that each cancelled out the other: He who hesitates is lost? Look before you leap!

I have to say that like most people, my life is littered with bad choices, most of them due to a never-ending struggle in my head between the influence of a domineering mother and my own impulsiveness. I am sure I could have done better if I had stood up for myself and/or took a deep breath before rushing down the next blind alley. (I exclude my life partner from this reflection, of course.)

But I guess what surprises me is how accepting I’ve become of the consequences of those bad decisions. In saying this, I don’t think I’m making a plea for passivity in a world of bullies, nor am I indulging in that most insidious destroyer of hope and endeavour, the self-help mantra to ‘live in the moment’.

Instead, I think we must be hard-wired to come to terms with ourselves, just as the last opportunity to do better than we actually did passes from us to the next generation. Rather like wildebeest leaving the old and the frail behind as the herd moves on. I like the naturalness of the analogy, but only insofar as it excludes the crocodiles waiting for a square meal at the Mara River ford.

What decisions from your past have your regretted? Are there any choices you've made that make you as proud today as the day you made them?