‘How confronting your own mortality can be a good thing’ 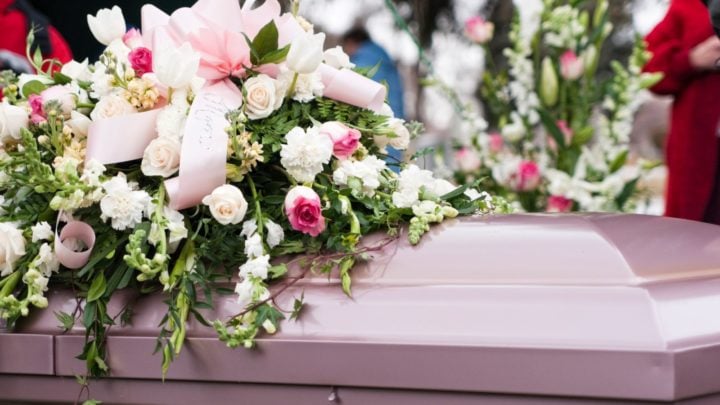 Spending some time discussing your funeral ideas now could save your loved ones a lot of heartache when you die. Source: Getty Images

A news article recently about the pros and cons of livestreaming funerals was very illuminating, and I read with interest the comments of the many about whether or not this is a good thing. Personally, I think anything that gets people talking about death and dying is a good thing as confronting one’s own mortality before one kicks the bucket will allow your family to have a clue about what you want to happen after you die — and its much less likely the they will fall into organising and paying for something just because that’s what is normally done.

Some folks would prefer to not talk about death, but the reality is none of us are getting out of here alive and burying your head in the sand (see what I did there) and pretending it isn’t going to happen probably isn’t very grown up.

Let’s bring the elephant in to the room. One day you will die. Sorry if that’s a shock but there it is, so will I and so will the person sitting next you. Allegedy so will Keith Richards, but I am not so sure about him.

But we don’t plan to die. In fact, we avoid the whole topic in droves — but something has to happen to your body after you die.

At present around 14 per cent of Australians pre-plan or pre-pay for a funeral and so, keeping in mind that 100 per cent of us will indeed die, that means 86 per cent of us have our heads in the sand and our fingers in our ears as we say loudly ‘blah blah blah’! I think its because first we aren’t keen to confront our own mortality and second dying these days can end up being quite the expensive exercise, anywhere form $6,000 and upwards.

The other day I went to a different kind of funeral in a backyard. It had rained overnight and the garden was lush and smelt of freshly cut grass. The little children in the family sat under a tree at the bottom of the yard away from proceedings with a lady who told them stories from a big picture book. Their families wanted them there, but they didn’t have to be right amongst it all in the thick of all the tears. They played her favourite music — Aka Bilk — and her family and friends told the stories of her life.

Her sisters told of her early years and what it was like for them growing up. Her husband spoke of when they met and how he courted her. Her own mother spoke of the heartache of losing a child before her time. Her village of carers spoke of the lessons she had imparted before she died.

Her beloved animals sat up the front — I don’t know how animals know but somehow, they do — then the grandchildren came over, they had their little hands painted by the storyteller and left their beautiful sticky fingers all over the sides of her coffin. When it was time for her to leave, we formed a guard of honour and as is customary for folks in the entertainment industry she received a rousing standing ovation as she left — on a custom designed Harley.

When you die there are a lot of things you don’t have to do anymore. You don’t have to go to church or spend $10,000 on a funeral that looks like every single funeral you ever went to. You can be buried in an ecopod or a shroud. You can be planted along with a tree in a national park, you can be turned into a paperweight or a piece of jewellery, or you can wave to everyone from a video of you singing ‘Wish Me Luck (As You Wave Me Goodbye)’.

We have to stop pretending death isn’t going to happen and before we shuffle off the mortal coil we have to talk about the end.

Have you considered your funeral or discussed your wishes with your family?