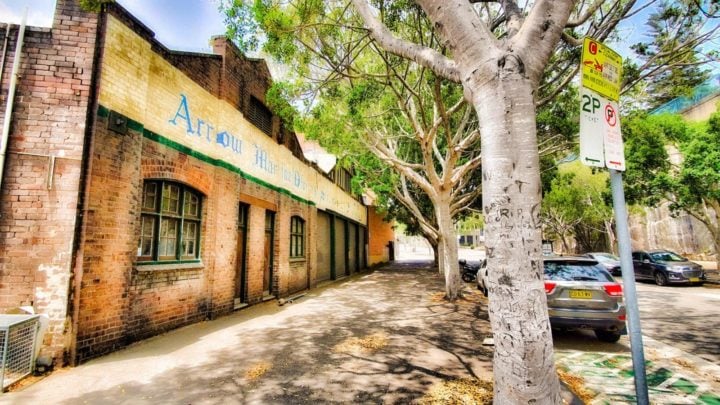 I had a fun time with some runners recently. After a while on the Bay Run I digressed on my bike and headed up Lilyfield Road in New South Wales in order to get to the Anzac Bridge, passing a couple of runners at the start of the climb. At the top there’s a set of traffic lights that were, of course, in the red mode. While I waited the runners caught up, saw a gap in traffic and bolted across the intersection.

With a green light I pedalled off, caught and passed them and then got stuck at another light. Same scenario, but this time I had some clear road ahead. In fact, this once main road was turned into a back street some time ago because of an expressway nearby, so the next time I stopped was a couple of kilometres further on when I’d left them way behind … or so I thought.

As I stopped to take a picture I heard the by now familiar ‘thump, thump’ of pounding feet on the pavement as they continued past. We reached Anzac Bridge at the same time, or at least the entry pathways that start half a twisty kilometre before you actually get on. The scenery is nothing if not varied. Old factories with huge chimney stacks, wonderfully painted silos of Concrete Australia, backhoes everywhere on a vacant lot and there, in the background, Anzac Bridge. It’s a different type of landscape.

Crossing the bridge is exhilarating. The lines of the eye-catching tension wires, views across the bay, architecturally significant new developments all coming at you at once and then you’re on the other side, cycling around the little frequented Jones Bay with its attractive parks and new high rise.

However, it was the huge rusty old riveted balls, looking possibly like mooring buoys, that set my camera finger aflutter. I later learned that, in fact, they were digesters, once used to crush sugar cane. I also learned that my curiosity and incessant searching to understand what’s around me is called psychogeography. It’s okay, it’s not contagious or anything, it’s where walking or cycling can excite people’s memories and imagination as distinct from flashing past in a car.

From there I followed the bay, eventually coming to another park, this time with cafes. Food near the water and views across to Balmain and a prominent church tower proved too much of a temptation so I soaked that up for just under an hour and then cycled slowly around to Darling Harbour, surprised at how much development and how quiet the area was. Late in the 20th century this once industrial area was converted wholly to residential with many of the original buildings refurbished and transformed into apartments.

Finally pulling up at the Maritime Museum (Mu-sea-um on the sign), I couldn’t help but notice ‘Life From A Suitcase’, an iconic bronze sculpture celebrating 19-year-old Biaggio Signorelli stepping onto Pyrmont Wharf in 1954 from Italy. He couldn’t have dreamed that he would leave his children and grandchildren an incredible Sydney hospitality legacy. Tragically, in May 2008, Biaggio passed away due to an asbestos-related cancer, Mesothelioma. More than 4,000 people attended his funeral and his legacy lives on today in the Signorelli Gastronomia food and wine emporium.

The modern work of art that fascinates me is a little further around. ‘Tied to Tide’ is a kinetic sculpture that translates the eternal return of the tides, as well as the more unpredictable wave wash and wind chop of Sydney Harbour, into movement. Red ladders respond to the wind, while counter-balanced hardwood beams are connected to a float that transmits the water’s movements along their length, continually rising and falling.

The tides lower and raise the beams, hovering close and almost parallel to the water’s surface at high tide and angling high above the receding watermark at low tide. In calm conditions, the beams bob gently, when it is choppy their action is more staccato. Whatever it’s doing, I find it mesmerising. I take several pics and then head for home. In more ways than one, it had been an illuminating day.

Have you ever explored your town or city in this way? What have you learned?