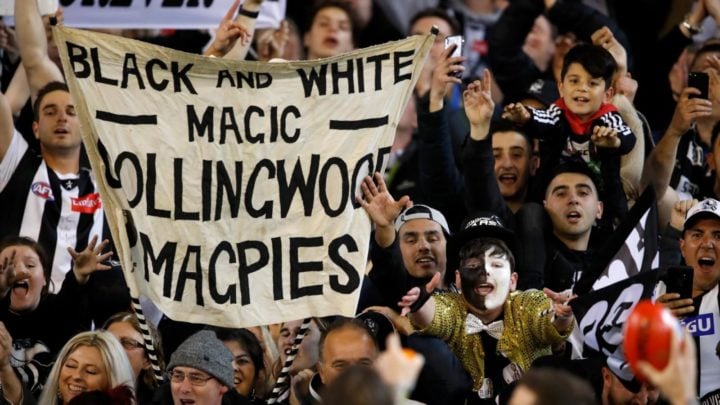 Collingwood Magpies fans go all out at the 2018 grand final between the Magpies and the Richmond Tigers. Source: Getty Images

Can Collingwood win the flag? Who? Collingwood, the Australian Rules football team people of Australia either love or hate, especially in old parochial Melbourne. Practically everyone in Australia has heard of Collingwood and formulates their own opinion.

Let me tell you this story of my Collingwood fandom. Very early in the seventies, 1971, as I recall, I met my beau who announced on our second date that we would be married ‘one day’, so long as I barracked for Collingwood, ‘his team’. Being an impressionable teenager, I joined the black and white army. What a hard way to learn what prejudice really means. Not only am I an educated woman, I barrack for Collingwood!

Need I say more. Here am I, old and grey, widowed after the long ago divorce, but the malady lingers on in my neurons. It is a question for the eons. Yes, at the start of every football season, I still wonder: “Can Collingwood win the flag?”

I must say, after all these years, I have heard many Collingwood jokes. Most of our believed Magpies fans have hides like elephants. Here is an example: “What do you call a pregnant Collingwood supporter? A dope carrier”. The jokes have continued through the years. “What do you say to a Collingwood fan with a job? Can I have a Big Mac, please?” Yes, well.

I must say Collingwood supporters wear it well, we are used to people sledging our club’s players, the guernsey, and our regular grand final failures. On the other hand, we do boast more finals appearances than any other club. No other football team of any code in Australia has the dreaded ‘Colliwobbles’, which demonstrates a unique ability to throw away match winning leads, to be valiant in snatching defeat from the jaws of victory.

Collingwood haters even despise the club’s president, Eddie ‘Everywhere’ McGuire, who is very good at media and publicity. Yes, as old song reprises, we wear it well. Our president is nearly as rich as Onassis anyway. Maybe that adds to the ‘Let’s hate Collingwood’ syndrome.

Why do the Collingwood Magpies fanatics and the supporter base stick fast, despite the prejudice? Some of the loyalty is family-oriented, a suburban tradition. Some of it is our eternal optimism about our star recruits, the club favourite champions, and always the promise of a successful year, rubbing in a victory over other teams’ fans.

Are all Collingwood supporters deluded? I can visualise a ‘Don’t call me stupid!’ convention for my Magpie army, with Jeff ‘Joffa’ Corfe (the leader of the club’s cheer squad) as the quiz contestant, and McGuire as the quiz master. Might be a no brainer. The roar of the liniment and the smell of the crowd! That reminds of another dumb Collingwood joke. “Why do Collingwood fans stink? So blind people can hate them too!” Ah, we’re used to that.

Wisdom comes with age… Or does it? As I am ageing, what is so wise about still wondering if Collingwood can win the flag? This year, or any year? This is a good Socratic question. What does wisdom mean when we barrack for any football team, especially Collingwood? Blind faith, maybe.

Thus I tune in to the football, check the progress scores. Could be yet another season of my long-term fandom of dud expectations. Any more Collingwood jokes? Yes. “Why can’t the Collingwood cheer squad have a Nativity play? Because they have no three wise men, or a virgin!” Totally hilarious! Nevermind, Collingwood are playing. The wind has swung around, it is five minutes before the final siren, scores are level, the Collingwood full forward has taken a spekky, right in front of goal. Shh, it is life threatening. “Can Collingwood win the flag?’ Still wondering.

Are you a sports fan? Do you barrack for a particular team?