‘I was a journalist, now I’m ashamed of my profession’ 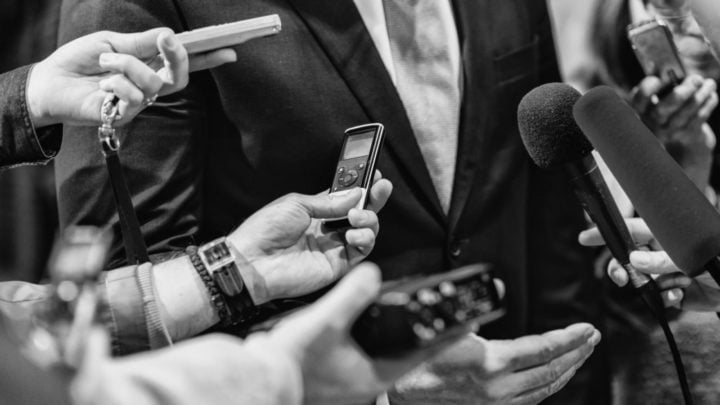 Everyone is an expert in at least one thing. It might be something as extraordinary as painting a masterpiece or as skilled as shaving timber into a sublime piece of cabinet-making or as long-suffering as putting healthy meals on a family table 365 days a year or as cunning as knowing the probabilities of a red/black landing on your favourite roulette table.

But there is one thing about which everyone, almost without exception, seems to be an expert: the media. I know this from 40 years’ experience of having people ask me, with a kind of knowing look in their eye, what’s it like to work for a newspaper? As though it was more like a sly thimble and pea trick than a job.

I suppose I must have been particularly exasperated one evening when asked for the umpteenth time whether I ‘made it up’. For I forgot my stoic patience in the face of such provocation and replied, “Yes, every morning the editor calls us in and tells us to get out there and twist everything into the most sensational story imaginable”. And the response should have been no surprise: A wide-eyed “Nooo? Is that right?” I nodded, knowing full well that, thanks to me, journalists were about to slip below used car salesmen in the league table of occupational credibility.

But, actually, such questions were not the worst I encountered, given that so many journos are little better than what we used to dismiss as ‘fire engine chasers’. That prize goes to an earful I got in an Illawarra pub from an opinionated local who insisted on telling me everything that I needed to know about the internal life of the Sydney Morning Herald. Nothing I said, based on 20 years’ living and breathing the place, was going to add even a smidgeon of new fact or insight to what he was already aggressively comfortable with.

For the record, let me say that I came into journalism later and laterally; that is, I didn’t grow into the profession allowing its mores to seep unconsciously into the marrow of my bones. Therefore, the very questions that perplex so many people about the media were on the tip of my own tongue when I had my first getting-to-know-you meeting with my future editor, the late, great Maximilian Walsh AM.

I was in a bit of a spot at the time; I needed a job very badly and so a small dollop of cravenness seemed a small price to pay to get on the payroll. I assured Max, cringing as I did so, that he should have no doubts as to my loyalty. I was confounded when he brushed this canard aside and politely informed me that as a journo, my only loyalty was to the integrity of my story. The truth, the truth and nothing but the truth. (So I hope the poor schmuck who swallowed my bilge about making it all up is reading this!)

Those words from Max Walsh were the most liberating I ever heard in my working life, for once I absorbed their import, I was far less likely to be intimidated by anyone I interviewed. And that’s the thing so many critics of the media never appreciate: Most of the persons (other than the victims) that you interview are, by definition, pretty powerful figures in the great scheme of things. Not only do they not take criticism lightly but, invariably, they prefer a pre-emptive strike to nobble you before you even get underway. Look no further than Donald Trump.

After all, even in li’l ole Oz, you don’t get to be prime minister or a state premier or lord mayor of a big metro city by being dewy-eyed sweeter than wine, as they say. (Or a corporate CEO or union secretary, for that matter.)

Recently, I received an ear-bashing from a retired amateur politician, who appeared to be another expert on everything. He asked me had I met/interviewed this prime minister or that premier? Yes, yes, yes, yes, I replied in respect of each name he threw at me. Did he/she impress you, was the next set of questions. No, no, no, no were the sequential replies, which prompted his last desperate question: Did anyone impress you? The crim who said he’d kill me if we published my story about his Spring Carnival betting scam — he deeply impressed me.

The truth is, every journo is a little bit different. Some of them, and I cannot deny my regard for such commitment, carry the enormous weight of social responsibility on their shoulders; always conscious that what you read in your morning newspaper or watch on your evening television news bulletin is what we used to call ‘the first rough draft of history’. And they would never rest until convinced that their story was nothing short of gospel truth.

But, unfortunately, as Western societies have become more bitterly divided so our journalistic coverage of public life has become less open, less tolerant, more careful not to offend what the journalist might feel is their core constituency of readership. This is not bias in the sense of twisting the truth, but rather it is a careful selection of what they will cover and who they will interview and what questions they will not ask. It saddens me to say so, but that extreme caution also infects what used to be called ‘the quality media’.

Papers I once worked for used to pride themselves on being ‘papers of record’, meaning you could go back to them weeks later knowing that everything you read was everything that could have been written. But as society has become more belligerent, so readerships have become more polarised and they expect the media organs they ‘support’ will confirm what they already believe. Most readers, these days, do not want to know what someone they absolutely loathe thinks about anything. Especially if it might reflect on opinions they already hold deeply.

Not only are we lesser people for this, I believe, but who is willing to argue that the world is a better, safer place because of it?

Would you agree with this writer's assessment of the media? Where do you find you get the most accurate, honest news reporting?