‘Breast supporting act: The secrets hiding in my wife’s bra’ 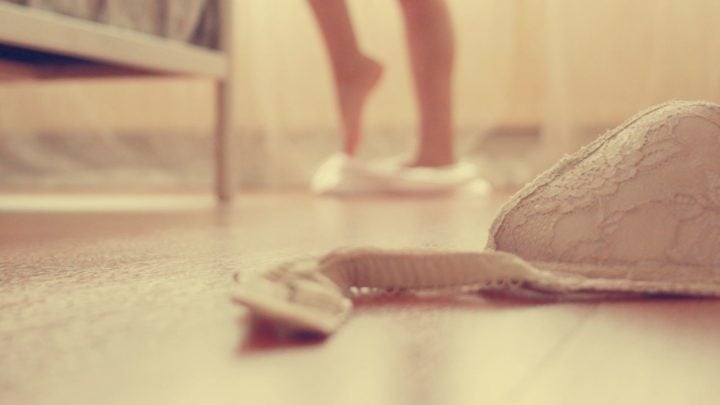 While getting undressed, Brian's wife revealed the secrets lurking behind her bra. Source: Stock Photo/Getty Images

As a male I don’t usually need to wear a bra … although I confess I did once — just to see what it felt like, okay! Why then am I writing about what is predominately a ‘female thing’? Well, I want you (males in particular) to discover one of the secrets hidden behind the bra — literally.

But first some history … Officially the modern day version of the bra was trademarked in the United States on November 3, 1914 by Mary Phelps Jacobs for the garment she called a ‘brassiere’. As it happens this item of female attire, a version of it anyway, goes back well before that time, possibly to ancient Greece.

A bit of research revealed that short lengths of cloth may have been used in the early days as women felt uncomfortable with their sometimes ample cleavage and they literally supported them by drawing the cloth under their chest and around their necks for support. Hundreds of years later further research shows large handkerchiefs tied together helped with the same kind of support.

What I am most interested in is what I’ve discovered modern day females are storing inside their bras … apart from the obvious.

Ever wondered why most ladies shirts don’t have pockets? My wife reckons it’s because she already has two of them on the inside! This became obvious recently when we needed some cash rather than a credit card. Discreetly she turned around and suddenly there was a crisp $50 note in her hand.

“Secret women’s business!” she said with a smile.

Over the next few weeks I began to suspect she must have had one of those so-called bum bags (also known as ‘fanny packs’ hidden under her blouse. Nope. She finally spilled the beans — literally — one night while getting ready for bed when a bunch of coins, some tissues and a credit card all fell to the floor.

“Oops!” she said. “Now you know where the secret women’s stash is!”

Of course I laughed, but at the same time thought “Wow! How clever is that?”

Imagine being held up and asked to hand over your cash or cards? All you’d have to say is “Here … They’re in my bag. Take it!” then run away.

Of course given this ‘secret hiding hole’ seems to have its uses, I’m still left wondering what on earth is inside the average woman’s handbag!

Do you know a woman who uses her bra in similarly creative ways? What other unusual items do you use as storage?