‘America’s once-great cultural contribution is now in the gutter’ 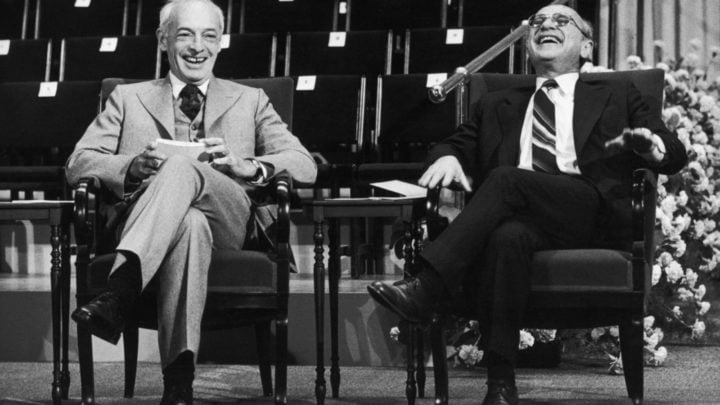 Canadian-born American novelist Saul Bellow (1915 - 2005) with the laureate for economics, Professor Milton Friedman, shortly after they were awarded the Nobel Prize for literature and economics repectively, 1976. Source: Keystone/Hulton Archive/Getty Images

With a massive sigh of relief, I finally closed Humboldt’s Gift, the 1975 novel by the American Nobel Prize-winner Saul Bellow. At 500 pages of densely argued metaphysics — and the metaphysics of death, for God’s sake — it occasionally comes up for fresh air with a burst of street-smart shtick that seems to be a hallmark of modern American writers. Overall, it was nothing if not hard work and so it was with some pleasure that I reached for the next book in my Retired Person’s To-Read pile.

It is the second great novel of another American Nobel Prize-winner, Sinclair Lewis’ Babbitt, a cautionary tale about the excesses of advertising/marketing/PR, etc., when freed from social restraint. More my kind of thing than the finality or otherwise of death. Yet, it was the preface that I was first drawn to, a short homily by another totally forgotten writer, the Brit Hugh Walpole.

Walpole was then entering a debate current in patronising British literary circles of the 1920s about how vulgar so much American writing at the time was, and he made this observation: “English readers will be making a very serious mistake if they miss this book. As a work of art it is fine, true, complete, understanding. As a piece of life it is yet finer, revealing to ourselves not only Babbitt but also — someone much nearer home. ‘There but for the grace of god goes …’.”

Walpole’s plea was made against a powerful current of American writing that began to flower with Lincoln Steffens and other investigate journalists whose work so deeply offended the sniffy moral classes that it earned the sobriquet ‘muck-raking’. Then it emerged in fiction with such works as Theodore Dreiser’s An American Tragedy, Sinclair Lewis’s Main Street and the massive output — later called social realism — of John Dos Passos, Ernest Hemingway, John Steinbeck and many others.

Whether one thought it was muck-raking or not, no one can read The Grapes of Wrath without imagining realistically what life must have been like for those driven from their homes during the Great Depression, people who one would never encounter personally in a month of Sundays.

Nor can one imagine Franklin Roosevelt’s New Deal without the context generated by this ferment of creative social writing in the 1920s and early-’30s.

For social realism was, in retrospect, a strongly American phenomenon. For those writers who told it like it was — to disinter that ’60s slogan — have never entirely gone out of fashion, whereas I am hard-pressed to remember a decent writer from elsewhere in the Anglosphere who made a comparable impact on our world at the time. In short, what the Americans wrote told us so much about who we were. What happened?

Well, the Brits threw out all their sentimental drawing-room melodramas — total war against Hitler made that a little absurd — and, with some help from George Orwell, reforged the link between literature and life, to be handed on to us with the angry young men and their kitchen-sink dramas of the 1950s. These were the inspiration for my own awakening — Kingsley Amis’s Lucky Jim, John Wain’s Hurry on Down, John Osborne’s convulsive Look Back in Anger, Alan Sillitoe’s Saturday Night and Sunday Morning. Telling it as it is.

Where was the comparable surge in social creativity on the opposite side of the Atlantic? Nowhere that I can find. Which left me wondering, how was it that a society that could generate such ferment as the United States in the 1930s have as its epitaph to the ’50s works like the vacuous Man in the Grey Flannel Suit?

Yet I can’t think of a better reason why such a clear break in transmission (of ideas) could have occurred after the dynamic upheavals of war and depression unless American society itself had not ordained, in effect: “Enough ferment. Enough disagreement. Enough dissent. Close ranks under pain of ostracism”. Enter Joe McCarthy.

Much has been written about Senator McCarthy and the Hollywood blacklists that our reaction is almost instinctive. Many films have been made, like Woody Allen’s The Front and Jim Carrey’s The Majestic and Bryan Cranston’s Trumbo, that we all know when to boo and cheer. If it comes again, exactly as it happened in a movie with Woody, Jim and Bryan, we’ll boo and cheers just as whole-heartedly once more. But …

It seems to me that the more US culture dominates the whole world, not only the Western part of it, so the light shining from North America has become more feeble, one that holds up no candle to reveal a path anywhere but into the empty void of self-indulgence. Which is fed to us week after week in cinemas, Netflix, television, YouTube, as The Next Big Thing. Because in 120 minutes they can tell you what, where, how and when. What they can’t tell you is: Why?

That, I think, is the true legacy of Senator McCarthy and the blacklists: by making the querying mind a subversive criminal they killed off the insatiable need of any healthy society to ask ‘Why?’. Why is something happening, or why should it not happen or, particularly, why something that is palpably unpleasant should happen at all. With the consequences of this mind-suicide playing out daily in a world regulated by the 24-hour news cycle, when even genocide is a news item to ritualistically titillate, bore or enrage us for three minutes, without the remotest possibility of anything being done about it.

No one in their right mind could believe that the world we now live in is going to be a better place in five years’ time, but where is the Uncle Tom’s Cabin or the Nineteen Eighty-Four to get us thinking before Armageddon — and then prodding us towards believing it just could be a better place after all, if we only said something, did something, about it, however puny.

How do you feel about this topic? What have you read that has made you question society and community?