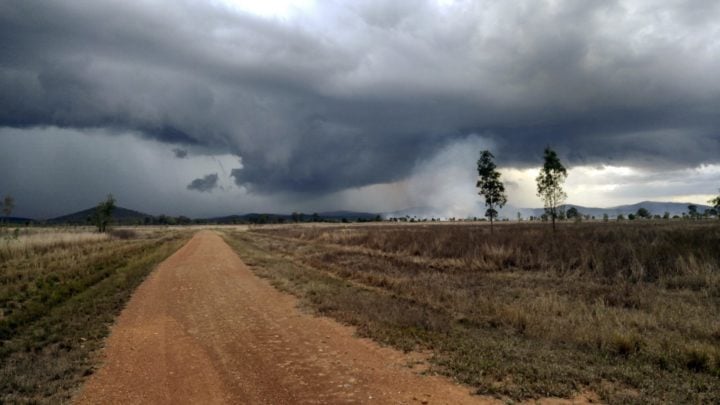 Could I be imagining that it is a gurgle of heavy rain water that I am hearing from inside the Santa-daubed package? Source: Getty Images

We are in the home sprint and Christmas Day is next Wednesday. Like most families, our Christmases have settled into a familiar routine. And, with our extended families dotted across the face of the earth and no grand-bambinos in sight, I feel confident there will be little variation in the pattern for the foreseeable future.

As it happens, our family has always loved Christmas, despite none of us being particularly religious. The forms of those festivities have developed their own special meaning. Thinking about it, I believe that what sets Christmas apart from, say, birthdays, is that it involves everyone. A year or so back, we (and others) made quite an effort to put on a decent spread for homeless persons and other strugglers in our local community, and last December we invited a group of neighbours in for a drink and a nibble and what a rip-roaring evening that was. That is one of the wonderful things about Christmas: it is a time when it’s easier to reach out and share the time of day with people you would ordinarily give but a passing nod to.

Meanwhile, like the Christmas routine of most families, ours grew out of the confluence of our personal lives with the advent of children. Sure, before Number One son was born, we had a tree, streamers and doovalackies hanging off light fittings; we always had a piece of turkey and pudding and we exchanged presents. But, frankly, the arrival of Number One son gave the season an intensity that was absent before.

When he was just three we went to the British Isles for a family trip and while there, we made a couple of discoveries that would have a lasting impact on how we celebrated Christmas. At York, we (or rather, Number One son) discovered Thomas the Tank Engine and Friends, and so many ‘friends’ made subsequent appearances in Christmas stockings that our successive homes have looked more like marshalling yards than suburban cottages.

And, second, we went to Winchester. I was a bit whacked from driving on narrow back roads from the south-west and, having been to Winchester before, I elected to take a nap while the others explored the ancient capital of Wessex. On their return I expected a gushing earful about such wonders as the cathedral and its monument to Jane Austen, the statue of Alfred the Great, the Arthurian Round Table in the castle, the Green Jackets museum and Winchester College, all soaked in the ambience of the eponymous 1966 pop song by The New Vaudeville Band. But no. They had only two words to impart: Past Times.

Past Times, like David Jones in Australia, was one of those imaginative firms that had developed a huge mail-order catalogue business (before being wiped out by internet shopping) and its specialty was sentimental Victoriana, ranging from useful gifts redolent of the designs of William Morris and Clarice Clift, to the more esoteric in the life-story of Thomas Crapper, inventor of the flush toilet (I kid you not). But its special market niche was the production of a fantastic range of Christmas fare — decorations, food, gifts, books, CDs, VHS tapes and so on. So dazzled were we by the Past Times store at Winchester, that the paradigm for family Christmases to come was virtually set that drizzly autumn afternoon in 1995.

About two weeks before Christmas, with our ears tightly plugged against the insufferable supermarket piped carols, the tree goes up, still decorated with worn-out, fraying memorabilia from Past Times, such as the string of tabby cats clutching plum puddings and the Three-Kings crowns hanging from the tips of pine fronds. Other decorations, Santa, kangaroos and foxes, have been added over the years but the core remains Past Times.

Similarly, the music in the house changes, a la Past Times, from the usual to old cassette recordings of Celtic Christmas songs, English carols and CDs of the far-fallen American folk-humorist Garrison Keilor, such as a Prairie Home Christmas, a compilation of excerpts from ‘Prairie Home Companion’ radio shows of the early-1990s. While the movies tend to recur, from Polar Express to Home Alone (one and two).

Past Times also supplied the core element of our celebration, a much battered VHS recording entitled Carols for a Victorian Christmas, which features British actors Robert Hardy and Dorothy Tutin and the choir of Magdalen College, Oxford, at St Mildred’s, Whippingham, the parish church attended by Queen Victoria when celebrating Christmas on the Isle of Wight.

One thing that I’m sure Her Maj did not do, however, was to embellish an otherwise dull evening’s viewing with cheeky nicknames and back stories for the 20-odd choristers. “Childish,” she would have snorted, just as was decreed by my two (embarrassed) sons, leaving me to watch Robert Hardy, et al, on my pat malone. Just as I am invariably the only viewer of Carols from Kings (College, Cambridge, that is).

The night before Christmas always features a drive around the streets of wherever we are living to peer in admiration at the exotic decorations piled high on otherwise plebeian homes. Sadly, this was always the big night out for Buffy, our beloved greyhound, a big part of all family celebrations, she who is no longer with us. The ritual reaches its climax on Christmas Day which has become a very tight-knit affair. Stockings (to perpetuate the myth of childhood wonder), special breakfast, the present opening, listening to Prairie Home Christmas whose old jokes and timeless skits still raise a few wry smiles, even after 25 years. And then the turkey.

It’s not much different, I suppose, from the celebrations of countless other families who have not fallen on hard times. But this year will be a little different in one respect: as I unwrap the biggest, most enigmatic present in the pile beside the tree, could I be imagining that it is a gurgle of heavy rain water that I am hearing from inside the Santa-daubed package? In the mystery that is the spirit of Christmas, that would be the most magical gift of all.

What are some of your family traditions at Christmas time? Do you have a Christmas wish for 2019?