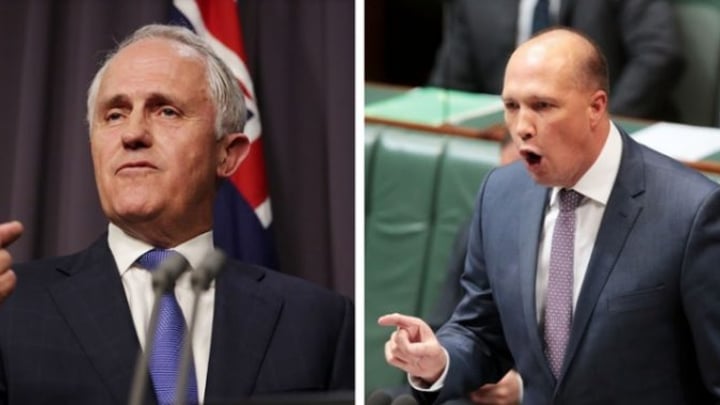 Australia will never be taken seriously on the world stage until we can manage our domestic politics. Source: Getty Images.

I have to admit, I thought the United States’s system of voting for a president for the full-term was good until Donald Trump was elected. Now I can see how difficult it is to remove him from office I am having second thoughts on that and my preference is swaying back to our system — flawed though it may be.

Australia would never cope with hand-on-heart allegiance to an ex-celeb, who’s a legend in his own lunchbox and sits right up next to God in a dollar almighty empire. Nor would they cope with a government that is preloaded with aristocracy — “Frightfully poor show old man, best pull one’s socks up”.

Ours is all our own. A genuine, Australian, “she’ll be apples”, rabble, but it is not working.

To make it look as if we all get a say in who runs the country, we have to vote — it’s compulsory. It doesn’t matter if you don’t know who, or what, you are voting for — you’ve got to go down and get your name ticked off the list to say you were given the option. That way no one can complain about who gets in because (theoretically) you gave them the vote. I say theoretically because if the one you voted for doesn’t have enough votes to get in, they can give your vote to another party — but what the heck — you voted for them so you must trust them to make the right decision on your behalf (insert derisive laugh here).

Then there is the prime minister. Now this is the person who is going to represent us on the world stage. This is the person we have to see smiling benignly at us from our TV, newspapers, media reports etc. The person who tells us what we want and why we can’t have it (oh no, sorry, that’s the treasurer). The prime minister is the one who tells us what they will do one day, and why they can’t do it the next.

Do we get a choice of prime minister? Of course not! That is decided by the party that was elected, after they won the vote by bribing the ones we voted for originally to give them their votes. Their chosen prime minister is sworn in — and they get to choose who they will swear allegiance to. Of course, it has to be between a select few but the wording and the order can vary significantly and be very telling — so watch for that one.

The rest of the world looks on in morbid fascination at our raggle, taggle politics. How can we have so little respect for our politicians and prime ministers, giving them names like Tony Rabbit and KRudd? Well, the truth is — they are not really OUR prime ministers, they are just the ones the leading party thought might do a reasonable job and get them voted in at the next election.

The job of the rest of the party is there to watch the opinion polls. Now the opinion polls are governed by the media, which is essentially owned by two very rich, very powerful players. These are the ones that pull the strings to make the pollies dance. The stories published and broadcast are weighted to give the general public a slightly distorted view of the truth. The public is then asked for their opinion. It doesn’t need to vary by much, just be consistent over several months for the party to start looking for a replacement PM.

The lies and the cheating? Well all parliaments have their fair share of that, the manipulation by the rich and powerful. It wouldn’t be a government if that didn’t happen. The problem is that the government is playing right into their hands, usurping the one who is theoretically in charge of the country for a raw beginner who can be more easily manipulated.

Our prime minister could be sensible and level-headed; a great ambassador, a coherent orator and be one of the greatest leaders in the Western world, but if they make a wrong move on the domestic front or anger the puppeteers and get too many twisted stories to their name, watch out. The polls give the mandate, the next in line for a pay rise is handed the dagger and the execution is swift.

We will never be taken seriously on the world stage until we can manage our domestic politics. This ridiculous children’s game of ‘tag’ for the position of prime minister has got to stop. For goodness sake parties, GROW UP! If the person you have chosen as your party leader is not performing as you expect, then discuss, mediate, compromise or give the job of choosing the PM to the public to vote on if it is beyond your ability to get it right. The future of AUstralia depends on it.

Have you been following the leadership issues in Australian federal politics? What is your opinion?