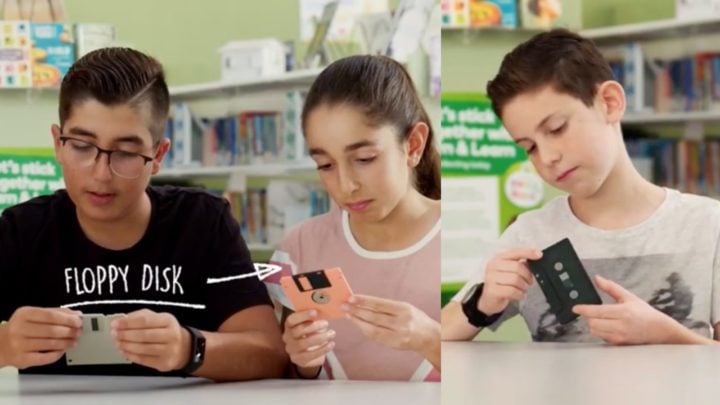 It’s certainly not unusual to see kids as young as three easily navigating their way around a smartphone or iPad but when it comes to old fashioned technology the situation, it’s a different story.

While Baby Boomers would remember using floppy discs to store documents and cassette tape players to listen to their favourite tunes, the devices are simply foreign objects to kids nowadays.

This was made apparent during a test run by Woolworths on a bunch of Aussie school children. In the short video recorded by the major supermarket chain kids in grades three to six were presented with a series of devices that were previously commonplace in Aussie households.

However, unlike their parents, the kids had absolutely no idea what they were looking at, especially when it came to floppy discs, library cards and an overhead projector.

Throughout the video the students tried their best to identify the old items but sadly, not many had much success.

Most sat looking at the devices with blank looks on their faces while one boy looked at a floppy disc and exclaimed: “Oh it’s a camera.”

Another seemed adamant an overhead projector was similar to modern technology and said: “It’s like an iPad or something.”

This wasn’t an unpopular opinion as according to a report compiled with the video, three quarters of Australian school kids don’t know what the device is.

While one boy was so puzzled by one of the devices, which turned out to be a cassette tape player, that he still couldn’t get his head around it even after being told how it worked.

“Yeah I did not think this was for music,” he said. “So would they hold it and just walk around with it?”

Library stamp cards also had the children stumped with a whopping nine out of 10 completely unaware what the piece of paper was.

“Is this really what they use for the library,” one confused student said.

Another added: “Looks like a passport but it’s only this piece of paper.”

While it may not come as much surprise that kids nowadays don’t know much about the devices their parents and grandparents used in the past, some may be shocked to learn many teenagers don’t even know how to read a clock.

Earlier this year schools throughout the United Kingdom controversial decision to remove analogue clocks from exam rooms as students struggled to read the time.

According to The Telegraph the consistent move towards all things digital has had serious side effects on today’s younger generations who are unable to read the time on the traditional clocks.

The situation has become that detrimental to a student’s education that schools have bid farewell to analogue clocks for good to create an easy and stress-free environment.

Speaking to The Telegraph about the decision, Association of School and College Leaders (ASCL) Deputy General Secretary Malcolm Trobe said teenagers nowadays are simply not as good at reading the time as the older generations.

“They are used to seeing a digital representation of time on their phone, on their computer,” he explained. “Nearly everything is digital so youngsters are just exposed to time being given digitally everywhere.”

Trobe went on to explain how they didn’t want to increase stress among students during the busy exam period. He explained that an alternative digital clock would also minimise confusion and ensure the teenagers understand how much time they have left to complete their tests.

Are you surprised the students didn’t know what the devices were? Can you remember using them?