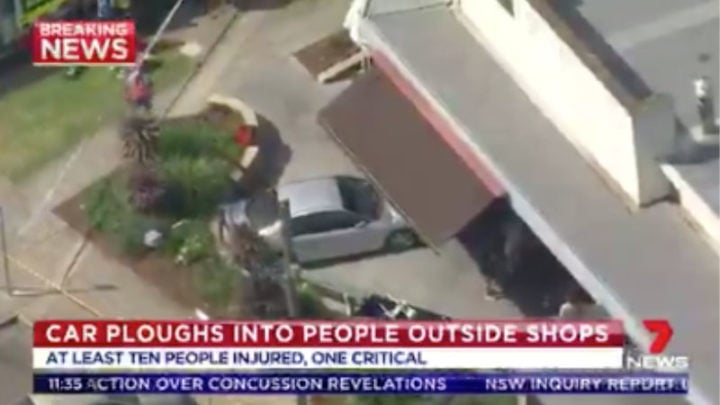 An 89-year-old driver crashed into tables outside of a cafe in Sydney this morning. Source: Getty.

A 40-year-old woman has tragically died after a car, driven by an elderly man, crashed into a cafe in Sydney’s north west earlier today.

Nine other people were also injured in the incident, which occurred at around 10am AEDT on Friday morning when a Holden Commodore collided with tables set up outside of a cafe on Malton Road in North Epping.

It is being reported that the car crashed into the outdoor tables after the vehicle dropped down an embankment from a disabled parking space.

Police confirmed that the man driving, who was 89 years old, was spoken to by officers before being taken from the scene to Ryde Hospital to undergo mandatory blood and urine testing. He was not injured in the crash.

According to 7News, the deceased woman was part of a mother’s group who regularly gathered at the Ta One Thai restaurant after dropping their children off at a nearby public school in the mornings.

Paramedics and police arrived at the scene and found 10 people requiring treatment for multiple injuries. One woman was taken to Royal North Shore Hospital in a critical condition and sadly passed away from her injuries.

“NSW Ambulance paramedics arrived and treated 10 people for multiple injuries,” a force spokesperson said in a statement. “A 40-year-old woman was taken to Royal North Shore Hospital in a critical condition. She later died.

“The nine others were treated on scene; with four taken to hospital in a stable condition.”

The Crash Investigation Unit are currently on scene and investigations continue.