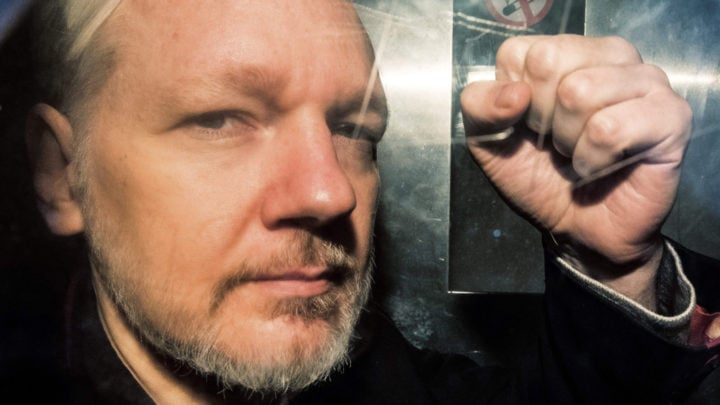 Julian Assange was sentenced to 50 weeks in jail for the breach of bail. Source: Getty

WikiLeaks co-founder Julian Assange will spend 50 weeks behind bars for breaching his bail conditions when he fled to the Ecuadorian Embassy in 2012.

The 47-year-old appeared in a UK court this week where he was sentenced to jail over the bail breach which took place seven years ago, the BBC reports.  Assange had reportedly been hidden away in the embassy since then to avoid extradition to Sweden to face questioning in a sexual molestation case.

However, last month that all ended when he was taken into custody and arrested by Metropolitan Police for failing to surrender to the court back in 2012. He was further arrested on behalf of the United States authorities after arriving at the central London police station in relation to an alleged conspiracy with Chelsea Manning.

During the court appearance Wednesday Assange expressed his regret and struggles faced over the years because of his actions.

A letter from Assange read in court and published in the BBC reportedly said: “I regret the course that this took; the difficulties were instead compounded and impacted upon very many others.

“I did what I thought at the time was the best or perhaps the only thing that I could have done.”

However, judge Deborah Taylor didn’t accept his apology, and according to reports explained Assange still had a choice at the time and took the wrong path.

The BBC reports she said  Assange’s actions “undoubtedly” had an affect on the court proceedings in Sweden.

While the matter of the bail breach has been concluded Assange still awaits charges for the alleged WikiLeaks conspiracy in which more than 700,000 confidential documents were disclosed.

According to the BBC he could face five years behind bars in the US if convicted of the crime.

The latest court proceeding follows Assange’s dramatic arrest at the Ecuadorean embassy in April. In a statement released by Metropolitan Police Services at the time, it was confirmed officers were invited into the embassy “on behalf of Westminster Magistrates’ Court”.