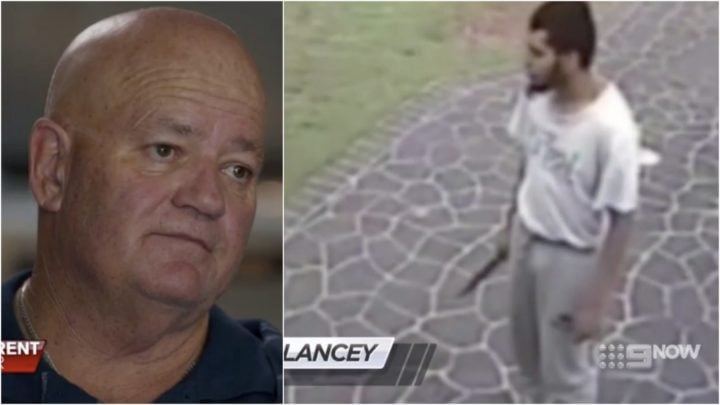 An Australian grandfather has relived the trauma of the day he was stabbed multiple times by a terrorist who lived around the corner from him, revealing he will never forgive the man who almost took his life.

Wayne Greenhalgh was stabbed by his neighbour Ihsas Khan, 22, on September 10 2016 who, unbeknownst to the local community in Minto, New South Wales, was a self-radicalised ISIS sympathiser.

Sharing his story on Channel Nine’s A Current Affair on Thursday evening, Greenhalgh revealed he thought he was going to die after Khan stabbed him, having been targeted by the lone-wolf terrorist because of an American-themed t-shirt he was wearing.

Shocking footage aired on the program showed Wayne running for his life as Khan follows him wielding a knife, while another neighbour can be seen attempting to fend off the attacker with a fence post allowing Wayne time to flee to a nearby hair salon.

It was the day terror came to the suburbs. #9ACA | FULL STORY: https://t.co/fXYBQicqg8 pic.twitter.com/kbDntQwfyU

Wayne was rushed to hospital and incredibly recovered from his injuries, despite thinking he “was going to go” during the ambulance ride to hospital, with wife Bronwyn admitting she didn’t know whether she was going to lose him.

Despite refusing to let Khan “beat him”, Wayne revealed that the events of that traumatic day have never left him, adding: “When I wake up it’s as if I’m still running away from him. It’s weird, but hopefully one day it will go away.”

Wayne now volunteers as a driver taking the elderly to medical appointments, revealing he was forced to give up his life-long career as a cabinet maker following the attack.

“After that I just couldn’t do my job properly,” he added. “It’s terrible, it’s really hard to take. It’s the only job I’ve ever done, I was 16 when I started, so pretty daunting, pretty frightening.”

The grandfather is also taking strong painkillers and anti-depressants as he continues to recover from the attack, revealing it has also taken a huge toll on his memory and means his wife now has to do most things for him.

Bronwyn added: “We are virtually living with a life sentence with what happened to Wayne.”

To date there have been six trials to convict Khan, with four trials being thrown out due to questions about Khan’s mental capacity. The fifth jury was unable to reach a verdict, however Khan was finally found guilty of committing a terrorist act at the sixth trial, according to the program.

Khan is due to be sentenced on June 5.

Have you been following this story? Did you see Wayne’s story on A Current Affair last night?