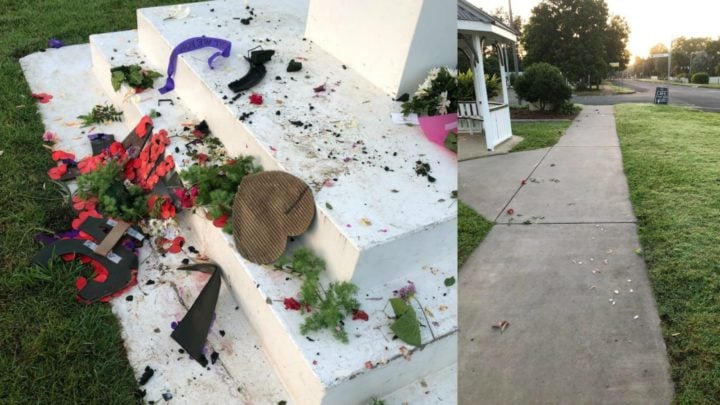 The public have been left disgusted and upset after a group of local children destroyed a war memorial just days after Anzac Day.

Mary Valley RSL Sub Branch Incorporated, based in the Gympie Region, shared photos of the destroyed memorials on social media.

“Its with great sadness I post these photos of the wanton destruction inflicted at our Cenotaph by the local CHILDREN,” the RSL wrote on Facebook.

“The Mary Valley RSL Sub Branch & community members went to a lot of effort to commemorate Anzac Day. Families, schools and community groups expressed their love and memories by the laying of wreaths.

“To find the wreaths smashed beyond recognition and strewn throughout the park and into the public toilets is most distressing.”

The RSL added: “It shows there is no respect or thought given by these CHILDREN to those who gave their all for what we enjoy today.”

Angry and upset, many local residents took to social media to vent their frustration.

“This is beyond disgusting. Children or not they need to be charged and shamed for doing that. So disrespectful,” one commentator wrote.

Another added: “Just shocking zero respect. Please catch them and teach them what respect means.”

A third wrote: “This is absolutely disgusting, no respect at all.”

“This is such a blight on a great community. I hope the parents are held responsible for their children’s actions,” one added.

Read more: ‘I used to like Anzac Day’: Yassmin Abdel-Magied hits out at online trolls

Meanwhile, it comes just days after Yassmin Abdel-Magied hit out at online trolls in an extraordinary Twitter rant, posting a series of angry messages about online abuse in the run up to Anzac Day.

The 28-year-old famously sparked outrage in 2017 when she shared a message online saying, “Lest. We. Forget. (Manus, Nauru, Syria, Palestine…)”, appearing to turn April 25 into political fodder for her views on Australia’s treatment of refugees.

She later apologised and even left the country following backlash over that, plus other controversial social media posts, public statements and damning speeches she’s made in the past.

But now she’s once again addressed Anzac Day online, and began a lengthy rant by telling her Twitter followers that she’d been tagged in a series of posts about journalists experiencing worse online abuse than “ever before”.