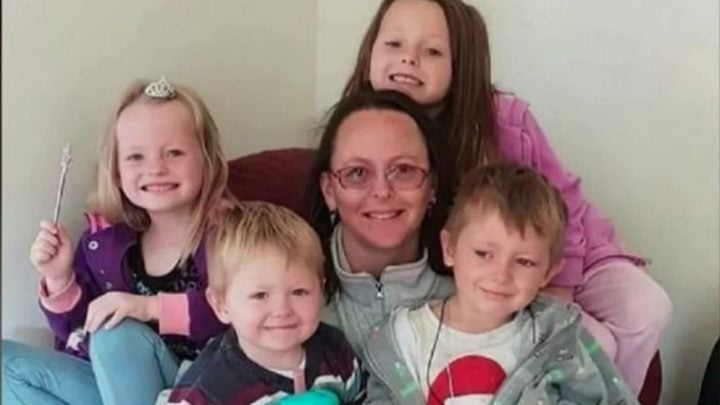 A mum, who died tragically along with her four kids in a car crash on a Queensland road, was apparently not overtaking a truck when the incident occurred. Source: Facebook/iwakeupwithtoday

A truck driver who witnessed the horrific death of a mother and her four young children on a Queensland road has shed some light on the heartbreaking incident, claiming the woman was not overtaking when the horror crash occurred.

Queensland Police initially said the collision happened when a Nissan station wagon pulled out to overtake another vehicle, and was then hit by an oncoming truck on the Bunya Highway near Kumbia, just after 7pm.

Both vehicles burst into flames, with the driver and three of the children pronounced dead at the scene. Another child sadly died on the way to hospital.

However, the truck driver, who was overtaken by the mum before the fatal smash occurred, has now claimed that is not entirely true and said Charmaine was not driving dangerously when the crash occurred, reports News.com.au.

In fact, in a post shared on Facebook the driver confirmed the mum-of-four was not overtaking him when she crashed into an oncoming truck as has been reported, according to the news outlet.

“I must clear something up that is unfair on this poor family,” the man, identified only as Mark, reportedly wrote. “This poor mother was not overtaking me, absolutely nothing in my witness statement suggests she was overtaking me.

“I was right behind her and although I won’t discuss anything I saw with anyone other than the detective in charge, I will not let this family think she overtook me dangerously. She did not. Fact.”

The shocking statement comes just days after Queensland Police Commissioner Ian Stewart confirmed that homicide detectives had been brought in to investigate the tragedy with suspicions it may have been a murder-suicide.

The police commissioner explained why their deaths haven’t been added to the national road toll yet, telling reporters in a video shared by 7News that there are different rules surrounding a road crash where there’s suspicion it may have been intentional.

The Queensland Police Commissioner has confirmed homicide detectives are investigating the death of a mother and her four children, who were killed in a fiery crash earlier this week. https://t.co/340BjgVa2f #7NEWS pic.twitter.com/H4bDgZ4E2l

“There (are) very specific rules about traffic crashes that occur when these … it’s not intentional, in other words it’s a straight crash,” he said.

“But there are very different rules – that’s why we now have homicide detectives working on this case – where there is a potential that there was an intention for someone to die.

“This will take some time and obviously the coroner has a very great interest in the outcome of that investigation.”

When asked if the crash was being investigated as a homicide, he added: “Absolutely.”

It came as The Courier Mail reported that police found a note – believed to have been written by the mother herself – about 200m from the crash scene.

It’s that discovery, plus an absence of skid marks at the scene, that reportedly prompted the homicide detectives to get involved.