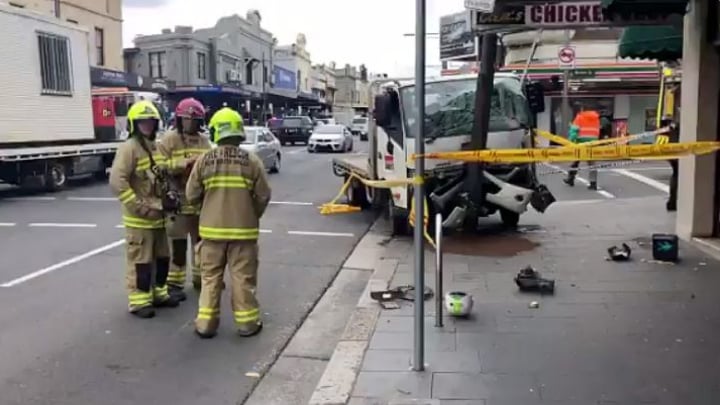 A 34-year-old male driver was chased down by members of the public after ploughing into an elderly woman in a wheelchair in the Sydney suburb of Newtown. Source: Twitter/ Gillian Bowen

A truck driver was chased down by members of the public after fleeing the scene of a crash which left an elderly wheelchair-bound woman in a serious condition.

The male driver, 34, was driving down a road in the south-western suburb of Newtown, Sydney at around 11am on Tuesday when he ploughed into a set of traffic lights and struck the 87-year-old who was being pushed on the footpath.

He allegedly fled the scene on King Street and was chased by several passers-by who caught up with him nearby on Wilson Street.

#BREAKING Crash in Newtown where a truck has hit an elderly woman in a wheelchair as she crossed the road with her daughter. Now in hospital. First on scene … @10NewsFirstSyd pic.twitter.com/p0XFVyiK7W

“Members of the public have chased down and apprehended a man who ran from the scene of a serious pedestrian crash at Newtown this morning,” NSW Police confirmed in a statement.

“He was arrested by officers from Inner West Police Area Command and was taken to Royal Prince Alfred Hospital for mandatory testing.”

Meanwhile the elderly woman, who according to Nine News was being pushed by her daughter, was also transported to the hospital in Sydney in a serious condition.

The incident comes months after an elderly woman was killed after being struck by a cement truck while crossing a road in Sydney. The woman in her 80s was walking across the road with her husband in the suburb of Crows Nest when the incident took place, the Sydney Morning Herald reported. It was reported at the time that the woman was dragged along the road for some time by the truck before it stopped.

According to the publication emergency services were called to the scene at the intersection of Albany Street and Willoughby Road following the incident.The woman was reportedly trapped under the truck upon arrival with “catastrophic injuries”. She later died at the scene.

The man, who is reported to have been holding hands with the woman when crossing the road, suffered minor injuries.

Speaking to The Sydney Morning Herald about the shocking incident back in May, NSW Ambulance inspector Carolyn Parish said they did “everything they could” to save the woman.

“The scene was quite stressful and traumatic for all emergency services, quite heart-wrenching for paramedics particularly,” she told the publication.

Meanwhile, in a statement provided to Starts at 60, a spokesperson for NSW Ambulance Service confirmed that a man and woman were treated at the scene, and that the elderly woman passed away at the scene, while the man suffered minor injuries and was taken to hospital.