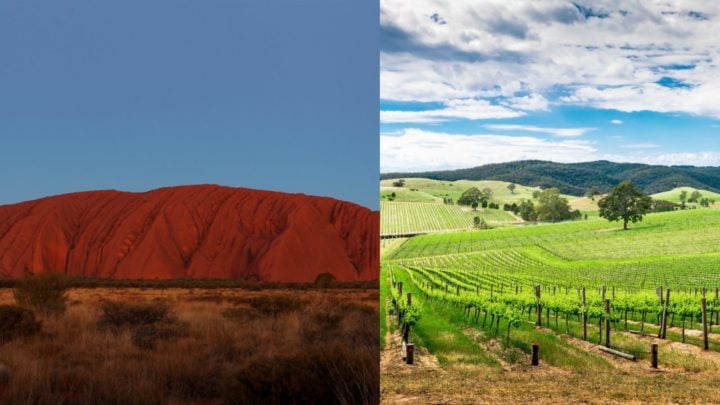 The tourism industry in Australia is set to boom as travel hotspots such as Uluru and the Barossa Valley, open the doors to visitors. Source: Getty

For months Aussies have been stuck inside their homes, but with Covid-19 case numbers continuing to drop, the possibility of exploring the country and travelling interstate is becoming very real.

This week the Northern Territory announced it would be opening its borders to visitors from around Australia in coming weeks, and South Australia has already given those in some states and territories the go-ahead to cross the border without quarantine restrictions. Queensland looks set to allow interstate travel on July 10 — as long as case numbers don’t increase. Meanwhile, Aussies are allowed to enter Victoria and New South Wales as they wish.

It’s certainly an exciting time for eager travellers who have been waiting patiently to pack their bags and escape the confines of their home. Travel at 60 has been bombarded with calls from Baby Boomers of late, while survey results have indicated travel is certainly on their mind.

“Our recent survey showed that 71 per cent of our audience indicate they will travel within Australia in 2020 and a whopping 91 per cent are intending to travel in Australia in 2021,” Chief Commercial Officer Wendy Harch said. “So Travel at 60 has been working hard on a range of short break holidays in all states to prepare for the borders reopening. We’ve also seen a large increase in interest in community group holidays whereby the appeal is to travel with a small group of like-minded Aussies on touring options where the travel is taken care of for you.”

So, what places around Australia are opening to travellers? And what should you add to your next holiday itinerary?

The Northern Territory is preparing to open its borders to travellers once again, with residents from all states and territories allowed to enter from July 17. So, if you’re planning on heading up north, it’s time to pack your bags and hop in the caravan.

“The Territory is a truly iconic destination; one that’s on the bucket list for many Australians. For too long Australians have said, ‘I’ll go one day’ – well that day has come, there are no excuses left,” Tony Quarmby, executive general manager of marketing at Tourism NT said. “Everyone here is looking forward to reopening and sharing this spectacular part of our own backyard with the rest of the country.

“This is your chance to escape your routine and the winter chill; the weather is warm, it’s more affordable than before, and there’s plenty of wide open spaces to explore and shake off the ‘isolation blues’.”

If you’re eager to travel in a group, Travel at 60 has a great deal on offer for a 6-day trip where you can explore the epic national parks, cruise majestic waterways and fall in love with the ancient and diverse region. It includes everything from accommodation and breakfasts to travel in a luxury coach.

South Australia is beginning to ease its border restrictions, with people from Western Australia, Tasmania and the Northern Territory now allowed to enter the state directly, without any requirement to quarantine. Meanwhile, Queenslanders will be allowed to enter the state from midnight on Friday. The state will then open borders to the remaining states and the ACT on July 20. And there are many wonderful regions which are patiently waiting for travellers to arrive, including the Adelaide Hills and Barossa Valley regions. Both boast gorgeous scenery and a great selection of wineries.

Also back on the travel cards is Kangaroo Island. The island has been hit hard this year, first with the devastating bushfires which swept across the country, and then with the coronavirus outbreak and self-isolation orders. But, thankfully it’s open for business again and there’s plenty to see! From native wildlife at Seal Bay, to the rugged coastline and national parks, you certainly won’t be bored.

Travel at 60 even has a couple of deals running, with special group tours to the island from Adelaide and Sydney. On the tour from Adelaide, you’ll travel with a group of like-minded Baby Boomers and play two friendly social games of lawn bowls on the island, while also enjoying local produce, and viewing the spectacular scenery in the beautiful region.

While the trip from Sydney will take you inland to Melbourne, before travelling along Australia’s southern coastline to Adelaide and across to Kangaroo Island. You’ll meet local farmers and winemakers, and take in the stunning scenery of the Great Ocean Road, Kangaroo Island and the Barossa Valley.

New South Wales borders are open to visitors across the country, and they’re all for Aussies travelling to the eastern state, with regional areas of NSW eagerly waiting for people to arrive. Are you a beach person and want to soak up some winter sunshine on the coast? Or perhaps you like the cold weather and are keen to visit the snow? Whatever you fancy, NSW is a great state to plan a trip to.

For those who love the cold, the Thredbo Ski resort is set to open on June 22, followed by Perisher Ski resort on the 24th and Charlotte Pass on the 26th. While you may not want to get on the slopes and have a ski, the grandkids would have loads of fun if you’re up for a family holiday!

Meanwhile, if you want something a little more peaceful, the Hunter Valley is gradually opening for business. A number of wineries in the region have reopened already, while others are planning to allow visitors in July. So, if you’re a lover of wine, this is the place to go!

Queensland isn’t yet open for interstate travel, but there’s talk of easing restrictions and opening borders on July 10. However, Premier Annastacia Palaszczuk hasn’t confirmed this date and is waiting to see whether there’s another spike in coronavirus cases. But, that doesn’t mean you can’t start planning your trip to the Sunshine State.

From the Gold Coast to the Sunshine Coast, right up to Cairns, Queensland certainly has a lot to offer travellers and tourism operators in these regions are calling out for visitors to help boost business. On the Gold Coast, you’ll find Mount Tamborine, where you can sit down for a coffee and chat at one of the gorgeous little cafes, or go for a hike in the rainforest if you’re feeling adventurous. Meanwhile, if you have the grandkids in tow, some of the theme parks on the Gold Coast are preparing to open soon. Sea World will open its doors on June 26, followed by Movie World and Wet ‘n’ Wild on July 15.

Alternatively, if the Great Barrier reef is on your bucket list, tourism and dive operators are preparing to get back to work, with some tours out to the reef set to resume on July 2. It may be winter, but that’s the perfect time to visit Queensland, with temperatures sitting comfortably in the 20s, so a swim certainly isn’t off the cards!

There are no restrictions on leaving or entering Victoria, and since June 1, overnight stays at tourist accommodation, including caravan parks and camping grounds without communal facilities, have been permitted. Since the announcement was made, businesses have slowly begun to open their doors to visitors including the Melbourne Zoo and Sea Life Melbourne Aquarium.

But, if you’re wanting to get a bit further away from the city, national parks throughout the state have also reopened. This includes the Dandenong Ranges, Mornington Peninsula National Park, as well as major sites along the Great Ocean Road – including Cape Otway and the seaside town of Port Campbell.

You could stretch your legs and go for a hike in the wilderness, or rug up and have a picnic on the coastline. Obviously social distancing rules must be followed, and booking ahead is encouraged, but it’s certainly good news for those who want to escape their home and explore what the beautiful state has to offer.

Are you planning a holiday? Where would you like to head first?