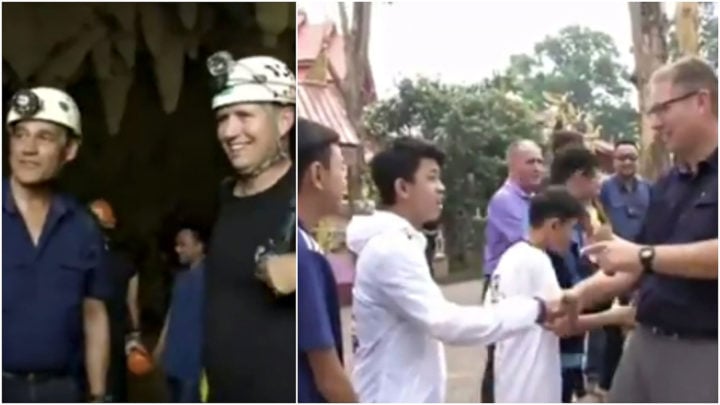 It has been nine months since a team of highly skilled and experienced divers put their own lives on the line to rescue a team of young Thai soccer players from a flooded cave system, where they remained trapped for 18 days after heavy rainfall filled the tunnels and blocked their route out.

Two Australians played a vital role in the dramatic rescue, which made headlines around the world, and now Dr Craig Challen and Dr Richard Harris have returned to northern Thailand where they were reunited with the boys whose lives they helped save.

Their return was shown on Channel Ten’s Studio 10 on Tuesday, as friends Challen and Harris were seen meeting the young boys for the first time since the rescue, as they went along the row shaking hands with each of the youngsters.

“I was desperately keen to know how the boys felt about meeting us for the first time and whether they had any confidence in what we were proposing to do,” Harris said. “Not surprisingly to me they said ‘Yep’, they were all very confident in what was going to happen to them.”

Challen and Harris also ventured inside the now infamous Tham Luang cave, telling the ABC that they “didn’t really get to have a proper view” when they were last there, as the cave was “filled with muddy horrible water”.

“We’re not planning on being in there for any great time,” Challen said. While Harris joked: “But that’s what they [the junior soccer team] said.”

Australian divers Richard Harris & Craig Challen, who were instrumental in the Thai cave rescue last year, have returned to Thailand to properly meet the soccer team they helped saved. pic.twitter.com/SOfKRfijFj

The pair were instrumental in the safe recovery of all 12 boys and their assistant soccer coach, as Harris, an anaesthetist from Adelaide, was tasked with sedating the boys using ketamine so they could be safely transported out of the caves by a team of 14 divers, which also included retired Perth vet Challen, who assisted with medical checks inside the cave.

In recognition of their part in the rescue, the Thai government extended an invitation to the pair – who were also jointly named Australian of the Year for 2019 – to return to the location, close to the border of Thailand and Myanmar.

The soccer team became trapped four kilometres into the cave after heading in as a rite of passage in June last year. The team originally set off for their adventure on June 23 and the international rescue mission began on July 2 – more than a week after they vanished.

Flash floods had made it nearly impossible for the team to escape the cave. They were eventually led out by the divers one by one, with all of the team surviving. However the incident did result in one fatality as Thai Navy Seal diver Saman Kunan died as a result of asphyxiation whilst moving equipment inside of the cave.

Just last week, British diver Josh Bratchley, who worked alongside Challen and Harris last year, had to be rescued from an underwater cave in the US after being reported missing by his dive group.

The diver, who was later awarded with a Pride of Britain Award for his efforts, had been laying guidelines during a dive at the Mill Pond Cave, in Tennessee, when his absence was noted, sparking a rescue effort by a team of specially-trained divers, who successfully located Bratchley.

Do you remember the Thai cave rescue? Do you think it was a nice gesture for the Thai government to invite Challen and Harris back?