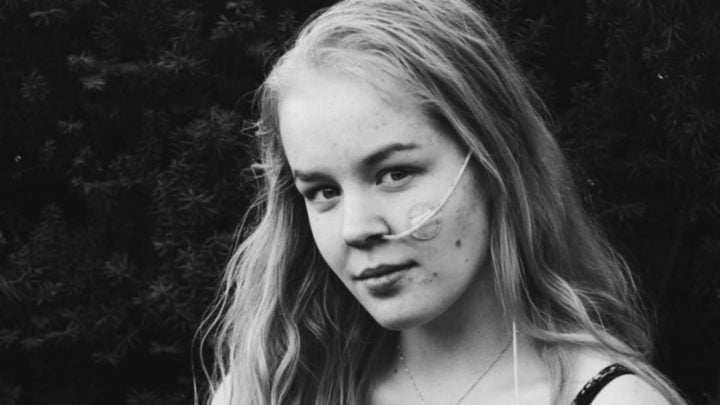 Noa Pothoven was legally euthanised at her own home. Source: Facebook/Noa Pothoven.

A teenage girl has been legally euthanised at home after revealing she felt “drained” and unable to continue living following a horrific childhood rape ordeal.

Noa Pothoven, 17, passed away in her own living room with help from an end-of-life clinic, multiple news outlets have claimed, after being granted the right to die in the Netherlands where euthanasia – under certain circumstances – is legal.

Noa previously revealed in her own book how she was sexually assaulted on three separate occasions from the age of 11, leading to her suffering from post-traumatic stress disorder, depression and anorexia in the years that followed.

While she’s used her social media profiles since to help raise awareness of mental illness, she shocked her followers recently as she shared a final, lengthy message alongside a photo of herself – confirming she would be legally ending her own life through euthanasia.

“I deliberated for quite a while whether or not I should share this, but decided to do it anyway,” she wrote, according to screenshots of the message widely shared online.

“Maybe this comes as a surprise to some, given my posts about hospitalisation, but my plan has been there for a long time and is not impulsive.

“I will get straight to the point: within a maximum of 10 days I will die. After years of battling and fighting, I am drained. I have quit eating and drinking for a while now, and after many discussions and evaluations, it was decided to let me go because my suffering is unbearable.”

According to Dutch newspaper De Gelderlander, Noa previously revealed in her autobiography, ‘Winning or Learning’, that she was assaulted on two separate occasions when she attended parties aged 11 and 12. She then claimed she was raped by two men when she was 14 in the Elderveld neighbourhood of Arnhem – her home city.

She added in her message online that while she was alive, she felt like she was simply breathing – adding: “I breathe, but I no longer live.”

Noa went on to plead with her friends not to try and talk her out of her decision, saying: “This is my decision and it is final… Love is letting go, in this case.”

Speaking to De Gelderlander last year, Noa’s parents revealed they had no idea she was so ill until her mum found a plastic envelope in her room filled with farewell letters to her parents and friends.

“I was in shock,” her mother Lisette told the news outlet at the time. “We didn’t get it. Noa is sweet, beautiful, smart, social and always cheerful. How is it possible that she wants to die?

“We have never received a real answer. We just heard that her life was no longer meaningful. For only a year and a half have we known what secret she has carried with her over the years.”

Noa herself previously explained her pain following the assaults, reportedly saying: “I relive the fear, that pain every day… Always scared, always on my guard. And to this day my body still feels dirty. My house has been broken into, my body, that can never be undone.”

Read more: We put animals out of their misery, why not humans? Noni Hazlehurst on euthanasia

At one of her worst points, Noa was reportedly admitted to hospital in a critical condition after her her organs were close to failing due to her anorexia. She was placed into a medically-induced coma at the time, so doctors could feed her through tubes.

According to Dutch law, kids as young as 12 can be euthanised in the Netherlands as long as a doctor confirms that their suffering is unbearable with no clear end or resolution in sight.

Euthanasia is legal in the Netherlands as long as it’s performed in accordance with the ‘Termination of Life on Request and Assisted Suicide (Review Procedures) Act’, which was passed in parliament in 2001 and became law in 2002.

Currently, Victoria is the only state in Australia to have passed voluntary assisted dying laws, with the legislation set to come into effect on June 19. It will offer a choice to competent adults with a terminal illness and six months or less to live. For those dying of neurodegenerative diseases, such as MND or MS, the time frame is extended to twelve months or less to live.

South Australia’s last bill in 2016 was defeated by a single vote in its lower house of Parliament. The Northern Territory and ACT need the Federal Senate to overturn the Euthanasia Laws Act 1997 which prohibited territories from legalising VAD.

What are your thoughts on this? Do you agree with euthanasia in a situation like this? Do you think there should be a higher age limit?