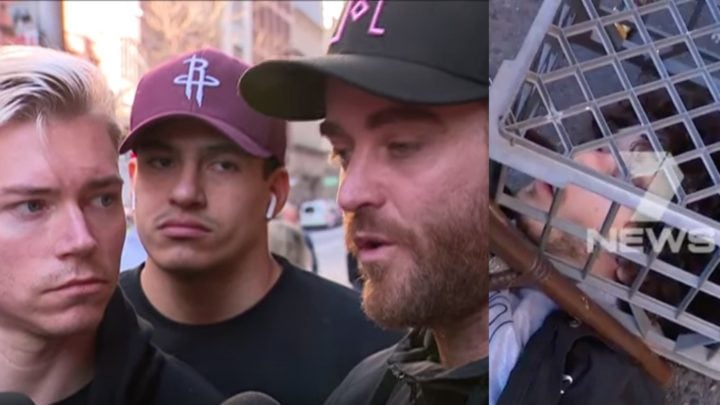 The men have been hailed as heroes for tackling the alleged knifeman. Source: YouTube/7 News and 7 News.

A group of men who managed to tackle an alleged knifeman to the ground in Sydney’s CBD have been hailed as the “highest order of heroes”, as they spoke out about the terrifying few minutes on camera.

Clarence Street and the surrounding area was completely shut down on Tuesday afternoon after a woman’s body was found in a unit nearby, just moments after a man – named as 21-year-old Mert Ney – was arrested amid reports he was carrying a butcher’s knife and shouting “Allahu Akbar” in the street. He was also accused of stabbing another woman in the back, who was later taken to hospital.

However, Paul O’Shaughnessy, Luke O’Shaughnessy, Lee Cuthbert and Alex Roberts all rushed to stop the alleged knifeman in his tracks and managed to tackle him down and pin him to the ground using a milk crate and chairs. They have since recalled the moment they jumped into action on camera, in an interview with multiple reporters.

Paul admitted it was his brother Luke who first saw the alleged knifeman, who was wearing a blood-soaked top, jump onto a car and begin shouting around 2pm. He told reporters, in a video shared by 7 News: “We were like ‘wow, what’s going on here’.”

“So immediately, we just got the troops and said, ‘Right, let’s go and see if we can help’,” he said, before adding: “Obviously, he’s wielding a knife. I don’t know whether it’s an instinct thing or what, but we was like, ‘Right, we’ve just got to try and restrain this guy from doing any more’.”

Paul went on: “My brother, he was the hero. He got a grip of him, along with another guy we don’t know, and put a crate on his head. He was just mumbling religious things.”

While he admitted he was feeling “very rattled”, he shared his pride in his brother’s quick thinking and subsequent actions. Now, NSW Police Commissioner Mick Fuller has praised the heroic efforts, telling reporters in a televised press conference that the men were “heroes of the highest order”.

He went on to say they had searched the alleged attacker and his home, and found information on a thumb drive “about other crimes of mass casualties and mass deaths around the world”.

It comes after a woman’s body was found close to where the incident took place. A NSW Police spokesperson told Starts at 60 in a statement on Tuesday: “Inquiries are under way after the body of a woman was found inside a unit on Clarence Street, Sydney, about 3.15pm today.”

Scott Morrison has since offered his support to those affected on Twitter, writing: “The violent attack that took place in Sydney this afternoon is deeply concerning. The attacker is now in police custody following the brave actions of those who were present at the scene and were able to able to restrain him.

“The motivation for this attack has not yet been determined as Police are continuing with their enquiries. Any further offical information will be provided by the New South Wales Police, who are keeping us appraised through our agencies, including details of casualties. Our thoughts are with all those who have been impacted by this violent attack.”

Have you been following this story? How do you think you would have reacted in this situation?