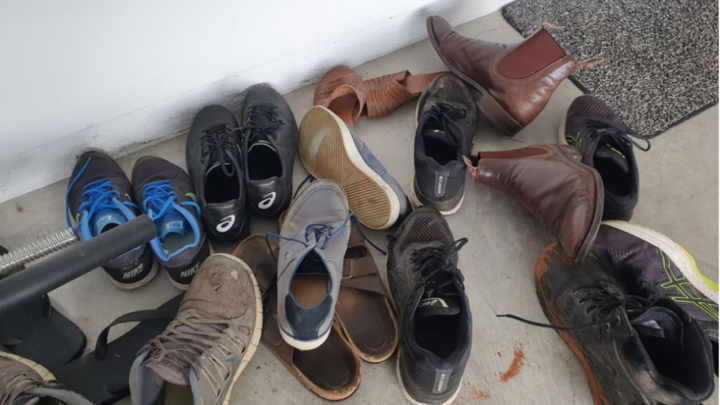 Summer may be behind us but that doesn’t mean snakes have slithered out of sight for good, with one slippery creature spotted by homeowners in Queensland this week.

The snake found the perfect hiding spot in a pile of shoes outside the property and it’s lucky they saw it – because it blended in perfectly to the environment.

In fact, it was so well hidden that Snake Catchers Sunshine Coast decided to put its followers to the test, posting a photo of the snake in its hiding spot on social media – and not many could find it.

“Let’s see who can spot the snake. It might not be too difficult to find however, see if you can correctly guess the species!” they wrote alongside a photo of a pile of shoes.

But, finding the snake wasn’t as easy as some might have thought. And while there were plenty of guesses, most were not certain they had found the reptile.

“I’m not positive if I’ve found it or not,” Lyn Schmidt wrote on the Facebook post. “Is it just it’s head sticking out near the centre of the pile of shoes? Regardless, I’m taking a wild stab as it being a yellow face whip snake.”

“There is no snake!” Sukh Singh Sandhu said. “Only unorganised shoes left at [the] front of the house, snake can hide their to get warm and enjoy fresh air of the shoes!”

While Lani Fischer struggled to see it as well writing: “Dang … I must be so blind!”

After giving followers a bit of time to try find it, the snake catchers posted a video to show just where it had been hiding. In the short clip, they lifted up a black shoe in the middle of the pile and out slithered a skinny little snake.

“Here is a short video of the baby Red Belly from yesterday’s ‘spot the snake’ game,” snake catcher Stu wrote. “If the family hadn’t of seen the snake originally then they wouldn’t of had any idea that the snake was there. Check your shoes before you put them on!”

Followers thanked the snake catcher for his advice and warning, with many admitting they need to keep a closer eye out for snakes, especially with the warm weather sticking around.

“Okay thanks mate,” Derek Armstrong wrote on the post. “Been keeping an eye out but the little one loves playing outdoors on her play equipment! Thanks mate.”

Have you seen any snakes around your home recently?