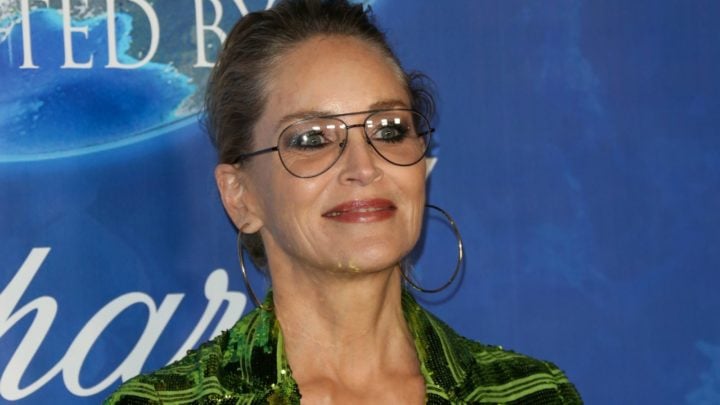 Sharon Stone pulled out all the stops in the metallic green and black striped pantsuit. Source: Getty.

Sharon Stone has proved she’s still well and truly leading in the style stakes after she put on a dazzling display in a plunging pantsuit this week.

The glamorous actress pulled out all the stops in the metallic green and black striped pantsuit, which featured an oversized jacket and flared pants, for the Global Ocean Gala in Beverly Hills, hosted by Prince Albert of Monaco, on Thursday night.

Stone, 61, wore the jacket buttoned up over a black bra and sported hoop earrings and black stiletto heels. The glamorous actress showed off her edgy style with a pair of oversized glasses, while she wore her pushed back for the outing.

The outing comes almost a year after the famous actress, who suffered a brain aneurysm in 2001, spoke openly at an event about her experience in a bid to raise awareness for the Women’s Brain Health Initiative.

“People treated me in a way that was brutally unkind. From other women in my own business to the female judge who handled my custody case, I don’t think anyone grasps how dangerous a stroke is for women and what it takes to recover — it took me about seven years.”

During that time, the actress said that she had to deal with both personal and professional losses.

“[From] trying to keep custody of my son to just functioning — to be able to work at all,” she said. “I had to remortgage my house. I lost everything I had. I lost my place in the business. I was like the hottest movie star, you know?”

She continued: “It was like Miss Princess Diana and I were so famous — and she died and I had a stroke. And we were forgotten.”

Over the years Stone’s wowed the world with her stunning looks and saucy scenes, with her sensual roles in Basic Instinct, Casino and Total Recall making her a Hollywood sex symbol. But some people forget she’s also a doting mother to three sons.

She has 19-year-old Roan Joseph Bronstein, who she adopted with ex-husband Phil Bronstein in 2000. She adopted her other sons, Quinn 13, and Laird, 14, on her own.

Are you a fan of Sharon Stone? Do you like her style?