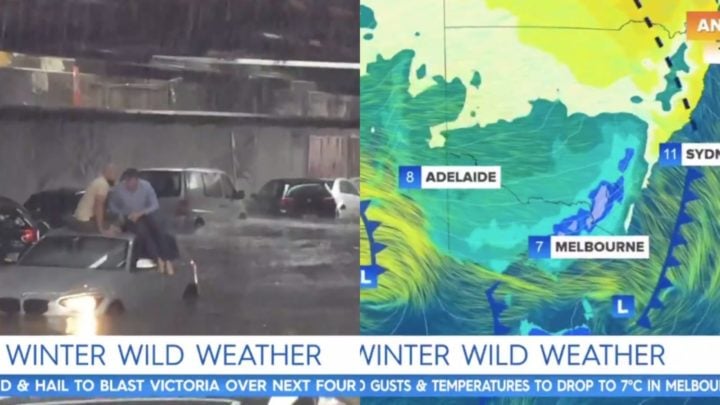 Aussies have been urged to prepare for the “strongest weather system this winter”, as icy winds and blizzard conditions are set to batter multiple southern states.

The Bureau of Meteorology has issued severe weather warnings as an icy Antarctic front moves in from the south – with temperatures set to plummet and weather not likely to improve until early next week.

While strong winds are due to start in southern parts of South Australia on Thursday, they’re then forecast to sweep through Victoria and into New South Wales on Friday and Saturday.

“This could be the strongest cold outbreak so far this winter,” the Bureau of Meteorology’s Michael Logan said in a statement.

The bureau warned in a weather forecast video that “damaging winds” in excess of 90km/hour would sweep across all three states, bringing hazardous surf and high tides.

Snow is expected to fall right down to as low as 400m in Victoria and 500m in Tasmania and NSW, with blizzards across the mountains. Meanwhile, many ski resorts could get over a metre of new snow.

There’s set to be heavy rain too, with more than half a month’s worth in many areas in just the coming days.

It’s feared the severe weather could even reach parts of southern Queensland, with snow moving into the Granite Belt and Tablelands. Meanwhile, there’s a severe weather warning for damaging winds across NSW, particularly in Illawarra, Snowy Mountains and parts of the South Coast and Central Tablelands.

In South Australia, winds of 110km/hour could hit some parts including Adelaide, the Mount Lofty Ranges and Yorke Peninsula, while high winds are expected across the alpine region on Victoria.

New South Wales, Victoria, South Australia, and Tasmania are in the path of a severe cold snap hitting today which has seen massive dumps of snow in the alpine regions. #9Today pic.twitter.com/CsEI9Q3McP

The Today Show’s correspondent Sarah appeared from Mount Buller wrapped up in ski gear, revealing strong winds had already begun sweeping in where she was.

Are you in any of the more heavily affected areas?