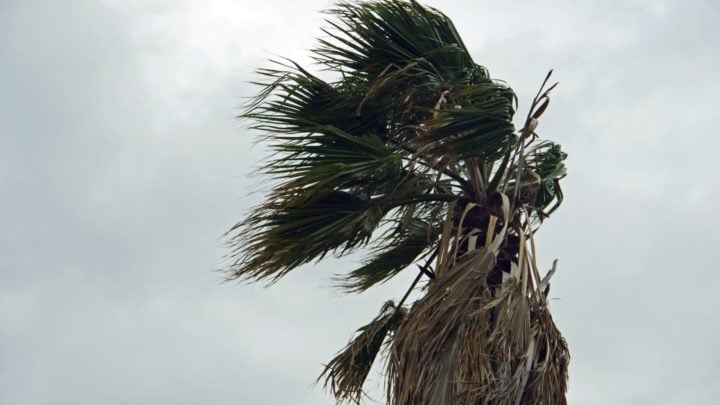 Strong winds with gusts of up to 90 kilometres an hour are currently hitting the south coast of NSW. Source: Getty

Severe weather warnings are in place for those in New South Wales and Victoria as an intense Tasman low brings damaging southerly winds, high seas and much colder conditions across Australia’s east coast.

According to the Bureau of Meteorology (BOM), strong winds with gusts of up to 90 kilometres an hour are currently hitting regions across NSW. In fact, temperatures in Sydney overnight dropped to as -0.2 degrees celsius. Meanwhile, in the Blue Mountains it dropped to -8C.

BOM issued a statement to social media on Tuesday morning, warning: “An intense cold front continues to move up the coast bringing damaging wind and surf. An 130 km/h wind gust has already recorded at Ulladulla this morning with winds set to increase in the coming hours for eastern parts of Sydney.”

An intense cold front continues to move up the coast bringing damaging wind and surf. An 130 km/h wind gust has already recorded at Ulladulla this morning with winds set to increase in the coming hours for eastern parts of Sydney. Warnings current at https://t.co/aFYDXKzNwA

A severe weather warning is in place for people in Metropolitan, Illawarra, South Coast and parts of Mid North Coast, Hunter, Central Tablelands and Southern Tablelands.

“Damaging winds averaging 60 to 70 km/h with peak gusts in excess of 90 km/h are currently impacting the south coast. Locally destructive winds gusts are possible about the coast during the morning near thunderstorms and heavy shower activity,” the BOM said in a statement, according to 9News.
“These winds are forecast to extend north this morning, moving through the Sydney region around sunrise, and the rest of the warning area in the north by the early afternoon.
“Areas most affected by the damaging winds will be the coastal fringes and the higher parts of the ranges. Winds then are expected to gradually ease from the south during this afternoon.”

Meanwhile, those living in the country’s sunny state have also been impacted by the severe weather, with snow spotted near the NSW border at Eukey, just south of Stanthorpe. According to the BOM, the last significant snowfall was back in 2015.

❄️❄️❄️ A few snowflakes seen this morning near the NSW border at Eukey, just south of #Stanthorpe. Snow is rare in QLD but does happen from time to time, mostly near the border. The last significant snowfall was back in 2015

It comes after the cold snap has also seen Australia’s popular ski resorts covered in a thick layer of snow. In NSW last week, Perisher resort was hit with at least 20 centimetres of snow overnight with temperatures dropping to -4C. Meanwhile, Mount Buller in Victoria was also coated in fresh layers of snow as temperatures plummeted to -4C.

What’s the weather like in your neck of the woods right now? Do you prefer when it’s hot or cold?