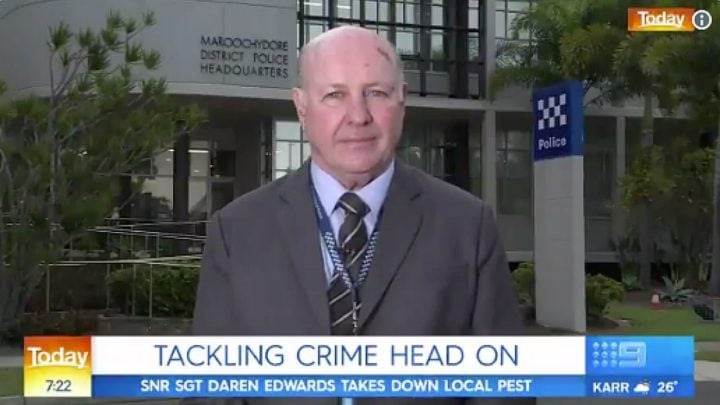 Sergeant Daren Edwards has been praised for his quick thinking in bringing down a criminal on the run. Source: Twitter/ The Today Show

A top cop has been praised for his quick thinking and incredible skills after stopping an interview part-way through to tackle a criminal who was on the run.

Senior Sergeant Daren Edwards leapt into action in the middle of a press conference after hearing an altercation between a man down the street and a young woman.

The policeman was speaking to local media when he all of a sudden turned around and ran towards a man, grabbing him by the legs and bringing him swiftly to the ground.

The incredible act was captured on camera with the footage quickly spreading across the internet for all to see, earning Edwards a flurry of praise.

The top cop behind that incredible tackle told us he’s a little embarrassed about the whole thing but wants it known “we’re not going to put up with women being intimidated or harassed walking down the street.” What a legend! #9Today pic.twitter.com/X4TIoNI8cc

Speaking about the incident on the Today show on Thursday morning, the sergeant explained exactly what happened in the lead up to the moment and what made him launch into action.

“I was doing a presser with the local media about some important things for our community and unfortunately a young lady was harassed and intimidated while walking along the street,” he said.

“I heard enough information and subsequently saw the girl’s father chasing that man and I was able to apprehend him and let the police investigate what had gone on.”

While people across the world have congratulated the police officer for his quick thinking, Edwards admitted he was left feeling a little embarrassed by the incident.

However, the sergeant said it seemed like the appropriate thing to do at the time and after years of playing football and working with the police force he knew what he had to do.

“You have those football playing days, you have a bit of an instinct about taking a running man straight at you down and at the end of the day police are faced with those things, those split decisions you have to make every day and you have to justify what you do,” Edwards explained.

“I thought it was appropriate at the time and that’s what happened. A little bit embarrassing quite honestly.”

Although much of the attention has been on Edwards himself, the cop claimed the main message that should be taken away from the incident is the protection of women and keeping the community safe.

Showing off an impressive graze to his head from the altercation the sergeant said: “I’m all good. A bit of bark off. It doesn’t matter, let’s go to work and make sure we do the right things as a community.

“At the end of the day the real message is we’re not going to put up with women being intimidated or harassed walking around the street.”

What did you think of the policeman’s quick thinking?