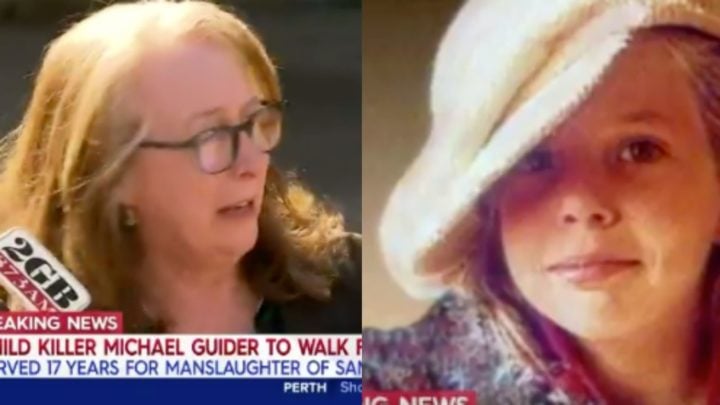 Samantha Knight's mum Tess spoke outside court on Tuesday explaining how angry she was that her daughter's killer will be released from jail. Source: Twitter/ Nine News Adelaide

The mother of Samantha Knight, who was killed by a paedophile when she was just a child, said she’s angry and “shaking inside” at the thought of her daughter’s killer walking free in a matter of days.

Speaking to reporters outside NSW Supreme Court on Tuesday after the decision was handed down to release Michael Guider on a five-year extended supervision order, Samantha’s mother explained her shock that Guider will not remain behind bars over the death of her nine-year-old child. Justice Richard Button rejected an application to keep the 68-year-old in jail for a further year with his 17-year jail term expiring.

Outraged that Guider would not carry out a longer sentence for the manslaughter of Samantha in 1986, mum Tess explained she wasn’t disappointed, just angry. Although she was glad the killer would be placed under strict supervision, the mother claimed it’s not enough, with the family still searching for answers as to where Samantha’s body was left.

“We should all be shocked,” she told reports outside court on Tuesday. “He hasn’t demonstrated that he’s changed. So not only hasn’t he told us what he did with Samantha’s body – and there will be no body to find anymore, it’s a long time – but he hasn’t given me and my family and Samantha’s friends any details of what happened that day.”

The mother went on to say that the impact on children he’s abused has been ongoing, adding that Guider’s impending release will add further distress to the situation. Tess claimed it’s not just about her anymore with the surviving victims of the convicted killer also left devastated by the news of his release. “I care about all of the other children that he abused and I care that this might happen again,” she added.

Meanwhile, survivor of Guider’s child sexual abuse Lisa Giles has also shared her thoughts on the impending release of Guider, speaking to reporters outside court on Tuesday and warning parents to beware of the killer. Lisa claimed “it’s not over” and said the deny of application for Guider to remain behind bars is an example of the way things are handled in the judicial system.

“Everybody working on this particular case is doing their job and doing their job within the structures that they’re given but we can see that is the problem right now,” she told reporters.  Adding: “Hold your children close, that’s basically it.”

Upon his release Guider will live in a halfway house attached to a prison and will be made to wear electronic monitoring equipment 24/7, according to multiple reports. His movements will also be strictly monitored and he will not be allowed to go near daycare centres, preschools, schools, amusement parks, cinemas, libraries, camping grounds, playgrounds, pools and other recreational areas where children might be, unless approved by Corrective Services.

Sharing details of the conditions in court on Tuesday, Button claimed there was no more that could be done for Guider’s rehabilitation in jail, saying the right thing to do is to release him under a lengthy list of supervision orders. “The three experts highly experiences in psychology and psychiatry all agreed that the defendant’s risks can be reasonably managed under a stringent and lengthy system of supervision within the community,” Button explained to the court according to news.com.au.

Guider initially pleaded guilty to the manslaughter of Samantha in 2002, 16 years after the little girl disappeared. However, he has since claimed that he did not kill her, adding that he will continue to deny responsibility for the rest of his life.

As well as serving time for manslaughter, the convicted paedophile was also jailed for a number of sex offences against 13 different young boys and girls from 1980 to 1996. He first landed behind bars in 1996 after pleading guilty to 60 counts of sex abuse with further offences coming forward in 2000.

According to multiple reports he would sometimes drug the children, dissolving sleeping tablets in soft drinks, and then assault them. The sexual abuse charges were all served concurrently and therefore overlapped, cutting down the time Guider spent in prison.