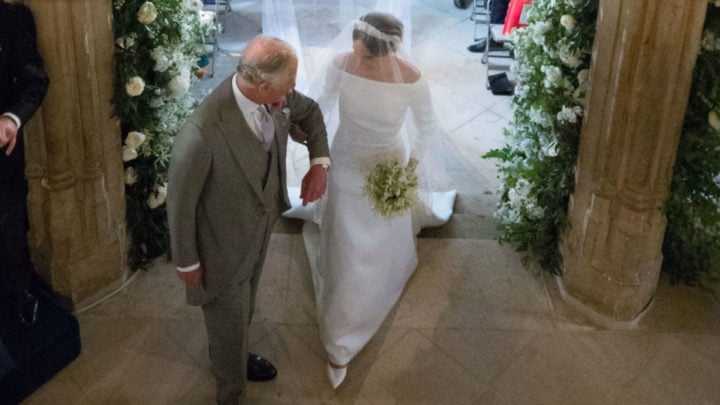 The Duchess of Sussex was accompanied to the altar by her father-in-law Prince Charles. Source: Getty.

The world watched in awe back in May 2018 as Meghan Markle, as she was then known, walked down the aisle at St George’s Chapel to tie the knot with Prince Harry.

While most brides are walked down the aisle by their fathers, however, the Duchess of Sussex bucked tradition and made the bold decision to enter the chapel and begin the walk down the aisle on her own, after her father Thomas Markle was forced to miss the wedding due to ill health. The beautiful bride was then greeted at the quire by her father-in-law Prince Charles, who accompanied her to the altar where her husband-to-be was waiting.

Now Thomas has revealed how he felt as he watched his daughter say her vows from the other side of the world, admitting that he felt jealousy towards the Prince of Wales after watching him accompany Meghan on her wedding day, saying it was something he “really wanted to do”.

The comments were aired in the UK last night, as part of Channel 5 documentary Thomas Markle: My Story. According to the Daily Mail, the 75-year-old said: “I stayed at a safe house and watched the wedding. My daughter looked beautiful. I wish that I could have been there with her. I was certainly appreciative Charles was there.”

He then told the interviewer he was “jealous” of Charles, before adding: “I admit I cried a bit about that. To this day I can’t forget that moment, she was beautiful. It was a nice wedding.”

Thomas, who has been estranged from his daughter, since the wedding, after it was revealed that he had accepted payment for staged paparazzi photos in the lead-up to the huge occasion. Last year he also shared a private letter, that had been written to him by his daughter Meghan, with a British newspaper, triggering further tension and a lawsuit against the publication.

Meghan’s father also discussed his feelings about the recent ‘Megxit’ drama in the documentary, claiming that Harry and Meghan’s actions have “cheapened” the monarchy.

“When they got married they took on an obligation, and the obligation is to be part of the Royals and to represent the Royals. And it would be foolish for them not to,” he said, according to UK newspaper the Daily Mirror.

“This is one of the greatest long-living institutions ever. They are destroying it, they are cheapening it, making it shabby. They are turning it into a Walmart with a crown on it, they shouldn’t be doing this.”

"They're turning it into a Walmart with a crown on it now." Meghan's dad tells his side of the story, tonight at 9pm. #ThomasMarkleMyStory pic.twitter.com/odTtfkjWgh

However his comments were made before the ‘divorce’ deal was finalised. On Saturday, Buckingham Palace released a statement confirming the terms of the agreement between Her Majesty the Queen and the Sussexes, which would allow them to establish a new life overseas as a family of three.

As part of the deal, the couple will drop their HRH titles as they are no longer working members of the royal family. They will also no longer receive public funds for royal duties, with the terms of the deal coming into effect in Spring 2020 (UK time).

And, following a backlash from the British public, the couple also agreed to pay back the £2.4 million (AU$4.6 million) of public funds that was spent on refurbishing their UK home Frogmore Cottage, which they will keep as part of the deal.

What are your thoughts on this story? Would you like to watch the documentary?