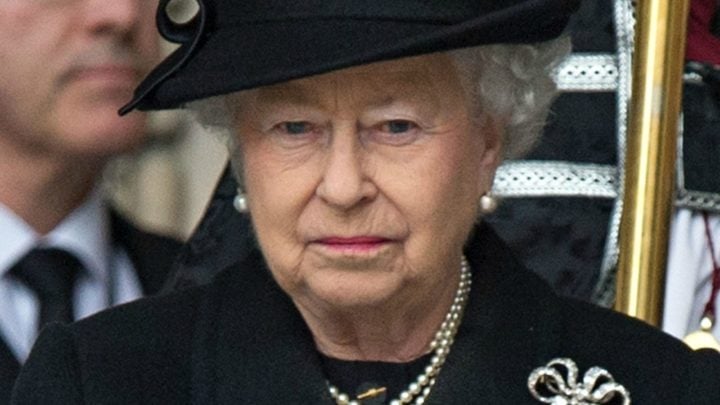 The Queen, pictured here at another funeral service, has said a final goodbye to one of her closest friends. Source: Getty

Farewelling a close friend or family member at any age is tough and Queen Elizabeth has now had to say a final goodbye to one of her closest friends at a touching funeral in Highclere, United Kingdom – the iconic setting of Downton Abbey.

The monarch had been friends with Jeanie, Countess of Carnarvon, for many years and was a special guest at the 83-year-old’s service at St Michael and all Angels Church in Highclere on Thursday – close to Highclere Castle itself. Jeanie was the widow of Henry, the 7th Earl of Carnarvon and former custodian of the castle, which fans will recognise as the beautiful setting of the much-loved period drama.

According to Hello, Henry worked as the Queen’s racing manager before his death in 2001 and the royal had remained good friends with Jeanie ever since.

The Queen was pictured at the funeral by Newbury Today photographer Phil Cannings, who shared photos on his own Twitter feed as it was not an official royal engagement for the monarch.

Dressing appropriately for the sad occasion, the Queen wore a sophisticated black coat with a white neckline and sleeves for her friend’s final farewell. She accessorised with a matching black hat that was complete with a white bow and topped off the look with her usual pearls, a sparkly broach, black gloves and a matching black handbag.

The Queen attended the funeral of her close friend Jeanie, Countess of Carnarvon, at Highclere Parish Church of Saint Michaels and All Angels @NewburyToday pic.twitter.com/2ZNVKla2z0

Jeanie was born in 1935 in Wyoming and after marrying Henry, went on to have two sons, George and Henry, as well as one daughter, Carolyne. The Queen had visited Jeanie just a week before her death on April 11, according to The Times.

Jeanie was famed for creating the Newbury Spring Festival, for her work for a number of charities and as the author of two cookbooks. Her funeral came just days after Queen Elizabeth’s own life was celebrated when she turned 93 on Sunday.

Members of the monarch’s family paid tribute to the matriarch last weekend, with the likes of her eldest son Prince Charles and the Duke and Duchess of Sussex sharing sweet messages and personal photographs in honour of her special day.

The Prince of Wales and his wife of 14 years the Duchess of Cornwall were among the first to share a message for the Queen online, posting a series of images of the pair and the monarch over the years, including one of the Queen as a young woman holding one of her beloved Corgi pups in her arms.

The Duke and Duchess of Sussex posted a far more personal message alongside several photos, including one from Meghan’s first solo engagement with the Queen in June 2018.

How do you cope with the loss of a loved one? When was the last time you went to a funeral?