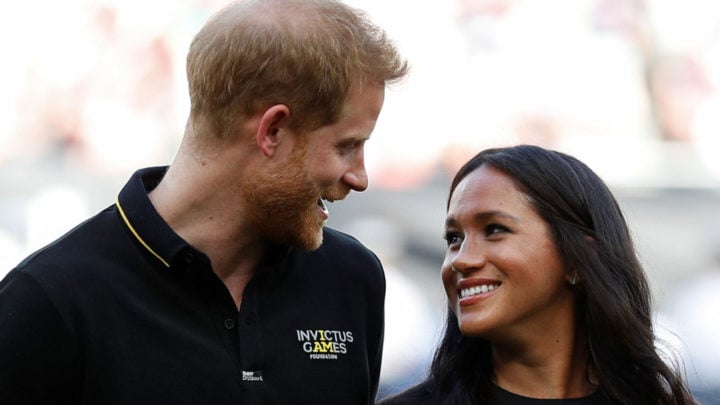 Harry and Meghan said they will no longer claim a salary from the Sovereign Grant. Source: Getty.

No matter where you look this week, it seems that Prince Harry and Meghan’s announcement that they are planning to step back from their roles as senior members of the royal family is everywhere.

From opinion columns and news reports, to interviews with family members and those who know the royal couple, the flurry of media coverage sparked by their unexpected statement has been enormous.

But it’s not just media outlets who are making the most of the shocking news, as a police force in the United Kingdom seemingly took inspiration from the Duke and Duchess of Sussex when putting together its most recent job advertisement.

South Wales Police shared their cheeky job listing on social media, writing: “Are you also looking to become financially independent? We are recruiting for a number of vacancies.”

Are you also looking to become financially independent? 🤔

We are recruiting for a number of vacancies. 🚔

The nod to the Sussexes didn’t go unnoticed either and many people commented on the post, sharing funny memes, images and messages in relation to the royal reference. One person shared a GIF which shows Prince Harry shouting ‘Boom’ and pretending to mic drop, with the footage taken from a video he recorded with the monarch to promote the Invictus Games.

Harry and Meghan made the shock announcement on Wednesday evening (local time) that they intend to move away from their current position within the royal family in 2020, and the couple broke ranks by sharing the news on social media, reportedly without warning the rest of the royal family.

In the statement, the duke and duchess said they plan to carve out “a progressive new role within this institution” by balancing their time between the UK and North America while “continuing to fully support Her Majesty The Queen”.

“This geographic balance will enable us to raise our son with an appreciation for the royal tradition into which he was born, while also providing our family with the space to focus on the next chapter, including the launch of our new charitable entity,” the statement, shared on Instagram, said.

The royal couple also launched a brand new Sussex Royal website where they outlined their plans for life away from the palace including what financial assistance they will receive from Her Majesty the Queen, having claimed that they wish to become “financially independent”, as well as where they will live as a family of three.

Up until now the Duke and Duchess of Sussex had effectively received a salary from Her Majesty the Queen in the form of a sum from the Sovereign Grant. However, moving forward, they will no longer receive this money which is estimated to total around £2.4 million (AU$4.6 million).

What do you think of the advert? Do you think Harry and Meghan have made the right decision?