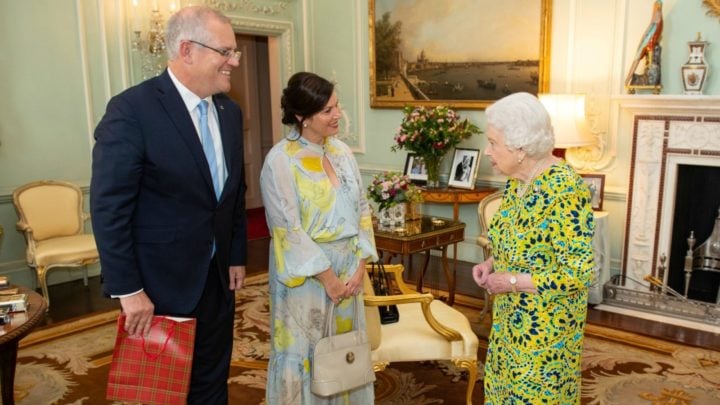 Scott Morrison and his wife Jenny are currently in London and their special gift for Queen Elizabeth has been revealed. Source: Getty

Prime Minister Scott Morrison and his wife Jenny have met with the Queen at Buckingham Palace and presented her with a special gift.

It’s the first time Morrison has met the royal since winning the federal election in May and he appeared slightly nervous as he and Jenny chatted with the Monarch in one of her private rooms at the palace. The prime minister was photographed holding a red gift bag, which, according to The Australian, contained a book about legendary Australian racehorse, Winx.

The gift was apt given the Queen’s well-documented interest in horse racing and all things equine. She’s often photographed riding horses at the royal family’s Sandringham estate and can be seen smiling from ear to ear at the royal Ascot every year.

The royals shared a photo of the meeting online, with the Queen sporting a vibrant patterned dress and a pair of classic black court shoes for the occasion.

Today, The Queen held an audience with The Prime Minister of Australia, Scott Morrison. His wife Jennifer Morrison was also received by Her Majesty at Buckingham Palace. An Audience is a one-to-one meeting with The Queen and happen regularly throughout Her Majesty's working week. The majority of Audiences are for members of the diplomatic community, though Her Majesty also welcomes political, religious and military leaders, and people who have won prestigious cultural prizes. 📷 PA Images

The UK is just one of the stops on Morrison’s current international itinerary. Following his election win last month, the PM announced he would be re-engaging with Australia’s neighbours, partners and allies around the world, with visits to the Solomon Islands, the UK and Singapore on the cards.

The prime minister arrived in the Solomon Islands on Sunday, where he met with Prime Minister Sogavare to discuss Australia’s ongoing relationship with the Pacific nation.

Read more: Scott Morrison joined by mum, wife and daughters as new ministry is sworn in

Solomon Islands is one of the closest members of our Pacific family. After serious civil unrest, Australia and other regional friends helped reestablish law and order through the RAMSI operation that has seen their country restore their democracy and get their debt under control. pic.twitter.com/8FgCx3gqIb

In London, he will represent Australia at the 75th anniversary commemoration of the D-Day landings to honour those who fought in famed Normandy landings in World War II.

He will also meet with other world leaders in the UK to build support for a proposed G20 initiative to stop terrorist organisations exploiting the internet and social media.

The trip will conclude in Singapore where the PM will attend an Annual Leaders Meeting.

“Australia and the world face uncertain times and global economic headwinds,” Morrison said in a statement ahead of his trip. “Our engagement with our family and neighbours and international partners is more important than ever.”

What do you think of Scott Morrison’s gift for the Queen? What would you give the royals if you ever met them?