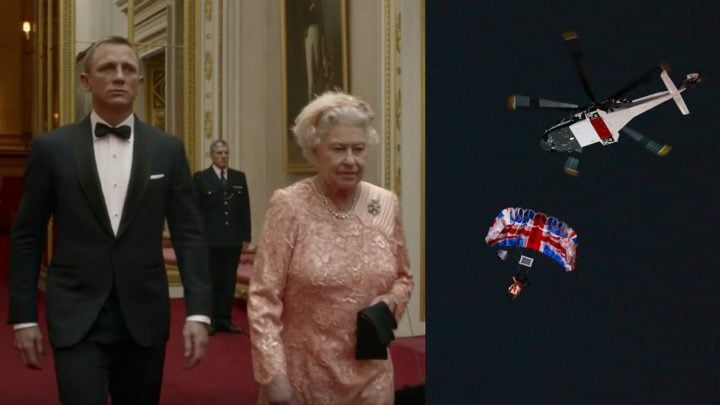 The Queen is known for her subtle humour now and again, but she surprised the world when she made possibly one of the best cameo appearances in history at the 2012 Olympic Games – alongside James Bond himself.

The monarch joined 007 actor Daniel Craig to record an opening ceremony video, which saw Bond arrive at Buckingham Palace, pick Her Majesty up and then appear to skydive from a helicopter over the Olympic stadium. And it apparently took the Queen just five minutes to agree to take part.

Royal dressmaker and confidante Angela Kelly – who has dressed the Queen for 25 years – has recalled the moment she was called into a meeting with director Danny Boyle and Private Secretary Edward Young to discuss the idea in 2011. Writing in her new book The Other Side of the Coin: the Queen, the Dresser and the Wardrobe, serialised by Hello! magazine, Kelly said Her Majesty loved the idea – as long as she could speak in the clip.

“Having listened to Danny’s plan, I asked him and Edward to give me five minutes so that I could ask the Queen,” she reportedly said. “I remember the look of shock on Danny’s face that I would be asking Her Majesty straight away, but there’s no point in waiting around with these things: if she said no, that would be the end of it.

“I ran upstairs and luckily the Queen was free. She was very amused by the idea and agreed immediately. I asked then if she would like a speaking part. Without hesitation, Her Majesty replied: ‘Of course I must say something. After all, he is coming to rescue me’.”

Kelly said she asked the Queen whether she’d prefer to say “Good evening, James”, or “Good evening, Mr Bond”, to which she chose the latter – having watched the famous films over the years. Kelly joked that when she delivered the good news to Boyle, he nearly “fell off his chair” when he heard her amazing request.

The video went without a hitch and showed the Queen greet Bond inside wearing a pretty peach outfit. Kelly revealed she made an identical one for her to then wear as she arrived in the stadium, while another was given to stuntman Gary Connery, who famously jumped from the helicopter on the night pretending to be her.

Elsewhere in the book, Kelly reportedly dispels claims Michelle Obama was ‘too tactile’ with Her Majesty when they met during a Buckingham Palace reception in 2009 – insisting the pair formed a close connection almost straight away. And she goes on to reveal she often wears in the Queen’s shoes before her public events, ensuring she’s comfortable in them.

However a really stand out moment in the book is one of Kelly’s memories from the Queen’s visit to Australia in 2006, when Kelly daringly played a prank on her boss with a toy kookaburra. She recalled how the Queen had told her of the birds, insisting she’d see a lot of them on the visit – while describing their unusual sound.

When Kelly saw none, she said she bought a toy one from a market, placed it in a cage and put it outside the Queen’s door. She reportedly wrote in the book: “I went to open the cage doors and she said loudly, ‘No don’t do that it will fly away’, and was behind me in a flash. I went to the bird, picked it up and solemnly told her it was dead.

“She looked horrified as I walked towards her and as she took the bird from my hands she realised I had been winding her up. It was really a stuffed toy. ‘April Fool’, I said with a mischievous grin on my face and she had only two words for me – ‘You’re sacked’.”

Do you remember watching the Olympics opening ceremony in 2012? Did you think it was a good idea?