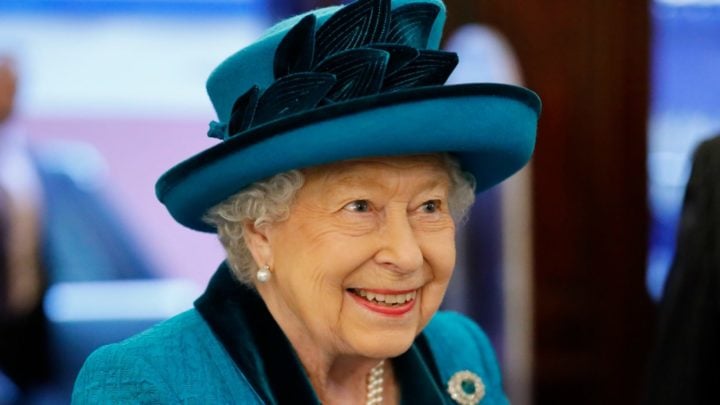 The 93-year-old monarch was all smiles during a visit to the Royal Philatelic Society in London. Source: Getty

Queen Elizabeth appeared to put the family drama surrounding her second son Prince Andrew behind her on Tuesday as she stepped out for a solo engagement.

The 93-year-old monarch was all smiles during a visit to the Royal Philatelic Society in London to open a new building on its 150th Anniversary. The Queen looked beautiful in a blue coat and matching hat, coordinated with her favourite black shoes and a black patent handbag.

The Queen was shown a number of philatelic artefacts, including a collection of stamps featuring herself through the years.

Today, The Queen visited The Royal Philatelic Society in London to open a new building on its 150th Anniversary. Philately is the study of stamps and postal history and other related items. The society aims to promote the science and practice of the study of stamps, as well as maintain collections of stamps. The Queen met young philatelists, architects of the new building, administration staff and supporters of the society. Her Majesty also saw displays of various different stamps and books. In this archive image The Queen visited the Society 50 years ago and viewed its collection. King George V’s personal stamp collection forms the foundation of what is today The Royal Philately Collection. You can also take part on our quiz by clicking on our Instagram story. ⬆️

The Queen’s visit comes less than a week after her second son Prince Andrew announced he was stepping down from royal duties, following his now-infamous interview, in which he spoke about his association with now deceased convicted sex offender Jeffrey Epstein. He told interviewer Emily Maitlis that he didn’t regret his friendship with Epstein because the wealthy financier had taught him much about business.

According to The Times, the Queen reportedly felt “hoodwinked” by her son’s interview and “did not give her approval”. The monarch has reportedly cancelled Prince Andrew’s 60th birthday party in February. Instead, the royals will mark Andrew’s birthday with a “small family dinner”.

In a statement, the Duke of York said that in the days since his Newsnight interview, it had become clear to him that his association with Epstein, whom he last saw in 2010, had become a major distraction to the royal family’s work and that of the charities and organisations he supported.