Queen is welcomed to her Balmoral estate with incredible bagpipe performance 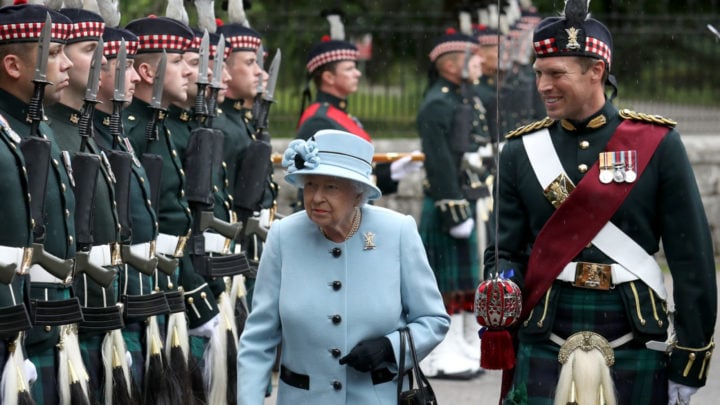 The Queen was greeted by members of the Royal Regiment of Scotland as she arrived at Balmoral. Source: Getty.

It’s a well-known fact that Her Majesty the Queen loves spending time in Scotland at her picturesque country estate, and the monarch received a traditional warm welcome on Tuesday as she arrived at Balmoral Castle for some down time.

The 93-year-old royal looked delighted as she was greeted by members of the Royal Regiment of Scotland outside of the castle in Royal Deeside, Aberdeenshire. The soldiers, dressed in full regalia, marked the occasion with an official Guard of Honour for their Colonel-in-Chief.

Several videos of the exchange were shared on the British Royal Family’s official social media accounts, with one showing Her Majesty walking alongside troops from Balaklava Company, not letting the Scottish rain deter her from her duties as music from a band of drummers and pipers rang out.

“Her Majesty was today met by Corporal Cruachan IV, Shetland pony and mascot of @theroyalregimentofscotland, as she arrived at Balmoral Castle, Aberdeenshire,” a post shared on Instagram read.

“Soldiers from 5 SCOTS and Pipes and Drums from 4 SCOTS welcomed The Queen today and will continue to provide a Royal Guard throughout her time at the Castle this summer.”

To mark Her Majesty’s official arrival at Balmoral Castle, The Queen, Colonel-in-Chief of the Royal Regiment of Scotland, received a Guard of Honour from Balaklava Company @5SCOTS. pic.twitter.com/dT38Cesdlh

Dressed in a powder blue dress, with matching jacket, for the occasion. And, as is her signature style, the monarch completed her elegant look with a stunning hat, adorned with a blue flower.

Small black accents on the Queen’s outfit were complimented by her black shoes and gloves, and the senior royal carried her statment handbag over the crook of her left arm.

Pipes and Drums were provided by @4_scots for the occasion 🥁🎵 pic.twitter.com/vnIu1sWRt1

Fans of the monarch were quick to comment, sharing in the Queen’s delight over the bagpipes. One person wrote: “How good it is to see you out and about! Those bagpipes, what a warm welcome! Enjoy your day Your Royal Highness!”

Another said: “Enjoying seeing The Queens arrival, thanks for sharing. Outside looking in, looks as though Balmoral is a special place to the Queen. Over the years I noted priceless Smiles. HRH enjoy your stay!” [sic]

While a third commented: “Love the bagpipes. Long live the Queen!”

Her Majesty was today met by Corporal Cruachan IV, Shetland pony and mascot of @theroyalregimentofscotland, as she arrived at Balmoral Castle, Aberdeenshire. Soldiers from 5 SCOTS and Pipes and Drums from 4 SCOTS welcomed The Queen today and will continue to provide a Royal Guard throughout her time at the Castle this summer. Swipe ➡️ to see Her Majesty inspect the Guard of Honour this afternoon!

The Queen regularly spends her summer holidays at Balmoral and enjoys partaking in activities such as attending local church services with members of her family.

The castle became part of the royal estate in the 19th century after Queen Victoria purchased the property in 1852, who commissioned the building of a new castle on the site.

Have you ever visited Scotland? Are you a fan of bagpipes?