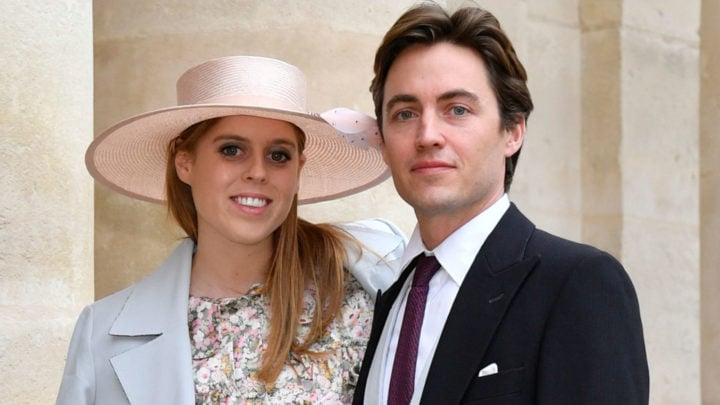 The couple are expected to tie the knot in May. Source: Getty.

The date for the wedding of Princess Beatrice and Edoardo Mopelli Mozzi has allegedly been leaked, with the couple expected to say their vows in just over three months.

According to UK publication Hello! magazine, the couple will tie the knot on May 29 2019, however the palace has not yet officially confirmed the date, nor the ceremony venue.

While it is not yet known where the couple will say ‘I do’, their evening reception is expected to be held at Buckingham Palace, marking the first royal wedding celebrations to take place at Her Majesty the Queen’s primary residence since the nuptials of the Duke and Duchess of Cambridge in 2011.

It has been widely reported that the couple have held off announcing the details of their wedding due to the current situation involving her father the Duke of York. Prince Andrew stepped down from his royal duties at the end of last year after questions were raised in relation to his friendship with convicted paedophile Jeffrey Epstein.

Prince Andrew has been previously blasted for appearing to fail to understand the gravity of Epstein’s offences. During an interview with the BBC’s Newsnight program, he admitted that he “let the side down” by staying in Epstein’s home in 2010, but denied claims by one of Epstein’s underage victims that she was forced to have sex with the prince.

Beabea – wow! I'm so happy for you my dearest big sissy and dear Edo. It's been a long time coming and you two are meant to be. 📷 by me!! “We are extremely happy to be able to share the news of our recent engagement. We are both so excited to be embarking on this life adventure together and can’t wait to actually be married. We share so many similar interests and values and we know that this will stand us in great stead for the years ahead, full of love and happiness”

Prince Andrew’s eldest daughter became engaged to property developer Edo in September 2019 and said in a statement at the time: “We are extremely happy to be able to share the news of our recent engagement. We are both so excited to be embarking on this life adventure together and can’t wait to be married.

“We share so many similar interests and values and we know that this will stand us in great stead for the years ahead, full of love and happiness.”

Edo popped the question whilst on holiday in Italy and Beatrice’s younger sister Princess Eugenie took a series of beautiful shots of the newly-betrothed couple, which she shared on Instagram to mark the occasion. The 29-year-old wrote: “Beabea – wow! I’m so happy for you my dearest big sissy and dear Edo. It’s been a long time coming and you two are meant to be. [photo] by me!!”

Proud mum Fergie also shared her own statement, revealing her pride and excitement alongside a new black and white photo of the pair. She said: “I know what a mother feels so I have tears of joy. I am so proud of this sensational news. Andrew and I are just the luckiest people ever to have two great sons in law.”

Jack and I would like to thank everyone who was involved in making our day so special and for all the wonderful wishes as we start married life laughing together. @alexbramall

Beatrice’s wedding will take place less than two years after Princess Eugenie’s wedding to Jack Brooksbank. The couple opted to say their vows at St George’s Chapel, in the grounds of Windsor Castle, in October 2018, followed by a reception at the Royal Lodge, Windsor Park.

Eugenie and Jack tied the knot in the same venue as the Duke and Duchess of Sussex, who married at St George’s Chapel just five-months earlier in May 2018.

Are you excited for another royal wedding?