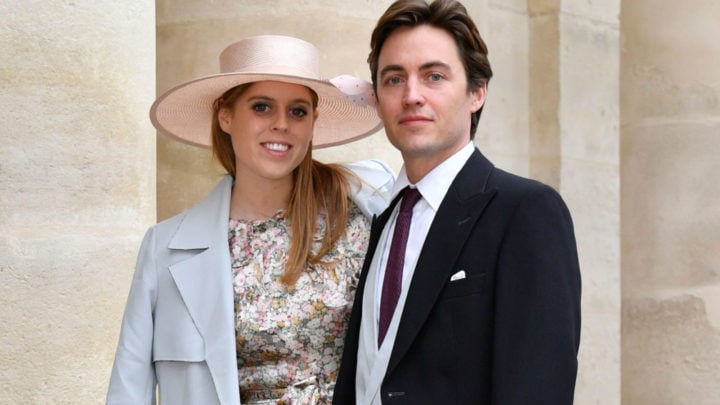 The couple will tie the knot on May 29. Source: Getty.

There’s not long to go until we are treated to another royal wedding as Princess Beatrice and Edoardo Mapelli Mozzi prepare to tie the knot in just three months’ time.

While Her Majesty the Queen revealed some of the key details about the upcoming nuptials earlier this month, it has now been revealed who will stand by Edo’s side as he and Beatrice tie the knot.

According to royal correspondent Richard Eden, the couple have asked Edo’s son Christopher, who is known as ‘Wolfie’, to do the honours when they say ‘I do’ on May 29. A spokesperson for the couple told Eden: “I can confirm that Wolfie will be best man.”

Property tycoon Edo shares Wolfie with his former partner Dara Huang, who is an American architect. It is also expected that she will be invited to the wedding.

The wedding of HRH Princess Beatrice of York and Mr. Edoardo Mapelli Mozzi will take place on Friday 29 May 2020. The couple became engaged in Italy in September 2019. The Queen has kindly given permission for the ceremony to take place at The Chapel Royal, St James’s Palace. The ceremony will be followed by a private reception, given by The Queen, in the gardens of Buckingham Palace. Image: © Princess Eugenie

Earlier this month, Buckingham Palace confirmed that the couple would say “I do” on May 29 at the Chapel Royal, which is located within the grounds of St James’s Palace in London. After the ceremony, a private reception, thrown by Her Majesty, will take place in the gardens of Buckingham Palace.

“The wedding of HRH Princess Beatrice of York and Mr. Edoardo Mapelli Mozzi will take place on Friday 29 May 2020,” a statement on the royal family’s Instagram page read.

“Her Majesty The Queen has kindly given permission for the ceremony to take place at The Chapel Royal, St James’s Palace. The ceremony will be followed by a private reception, given by The Queen, in the gardens of Buckingham Palace.”

The couple announced their engagement back in September 2019 after Edo got down on one knee during a holiday to Italy. They said in a statement at the time: “We are extremely happy to be able to share the news of our recent engagement. We are both so excited to be embarking on this life adventure together and can’t wait to be married.

“We share so many similar interests and values and we know that this will stand us in great stead for the years ahead, full of love and happiness.”

Are you excited for another royal wedding? Who was best man at your wedding?