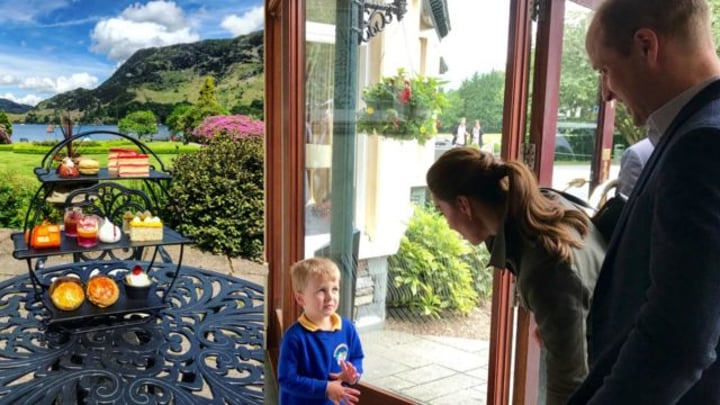 Earlier in the week, Prince William and the Duchess of Cambridge stepped out in the Lake District as they completed a busy schedule of duties which included everything from dry stone walling and sheep shearing to meeting local school children.

However, it has now been revealed that the couple, who often carry out official duties on their own, also found the time to slip away and enjoy a spot of afternoon tea in private at a picturesque four-star hotel.

William and Catherine visited the Inn on the Lake hotel on Wednesday where they tucked into a “decadent afternoon tea fit for a (future) king… and queen”, according to the hotel’s website, where a post about the royal visit has since been uploaded.

The hotel also shared their exciting news on Facebook, writing: “We had two VERY special guests stop by today!” Our Sales Manager Teresa and Dani, one of our Hotel Directors both had the pleasure of meeting the Duke and Duchess of Cambridge!”

The message was shared alongside a series of photographs of the royal couple as they arrived at the stunning location, perched on the edge of Lake Ullswater in Cumbria. And Catherine could be seen crouching down sweetly as she chatted with some of the hotel staff’s young children.

According to the hotel’s website, Prince William was so taken by the breath-taking views from the hotel, that he revealed he’d like to return for another visit and stay a while longer.

Read more: Catherine shows off casual style as she tries her hand at sheep shearing

Earlier in the day, the mother-of-three was filmed alongside her husband, as the royal couple helped a farmer remove the coats from two of his Herdwick and Swaledale sheep.

The duchess could be seen laughing apprehensively as she took the clippers to the farm animal as it kicked its legs in a bid to escape her hold, in video footage shared by Kensington Palace on their official social media accounts.

But the cool duchess continued with the task at hand, under the watchful eye of farmers Chris Brown and his son Jimmy in Lake Ullswater, and successfully sheared her very first sheep.

Catherine and William were not joined by their children Prince George, Princess Charlotte and Prince Louis on their most recent trip, however the duchess did tell locals about the kids’ love for the picturesque area, situated in the north west of England.

“She said that it was raining a lot and was a long way from their home in Norfolk, but they love it here,” schoolboy Jack Mumberson, 11, told Hello! magazine. “She said that her children love coming here and walking in the fells. She told us how nice the Lake District was and how lucky we were to live so close to the mountains.”

Do you like to see the younger members of the royal family carrying our official duties? Have you ever visited the Lake District?