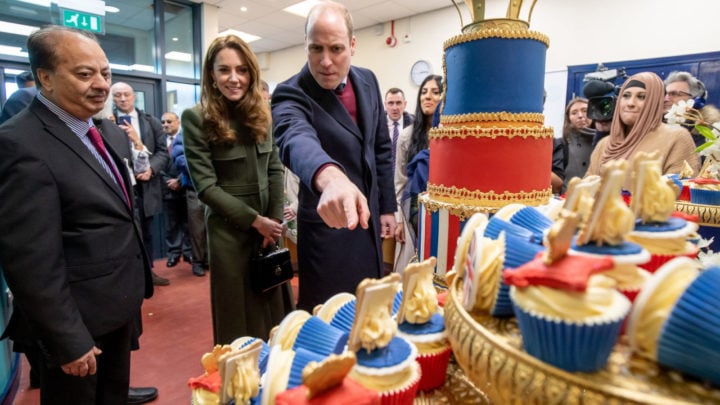 The Duke of Cambridge appeared shocked by the resemblance between himself and his young daughter. Source: Getty.

It is often said that Princess Charlotte is a dead ringer for her great grandmother, Her Majesty the Queen, but now royal watchers are questioning the comparison, after Prince William failed to recognise himself in a childhood photo.

The Duke of Cambridge was shown an old photograph of himself as a youngster during an official outing this week, but he was left scratching his head after wrongly assuming that the image was of his four-year-old daughter Charlotte.

William spotted the photo during a visit to the Khidmat Centre in Bradford on Wednesday, as he visited the northern English city with his wife the Duchess of Cambridge.

The sweet photograph of the young prince was part of an elaborate cake, made by Bradford local Siama Ali, which featured edible framed photos of the duke and duchess at different stages throughout their lives, from their childhood right through to their engagement, wedding and finally the birth of their three children.

Footage of the funny encounter was shared on Twitter earlier this week by British royal correspondent Emily Andrews, who wrote: “William was ‘wowed’ when he saw Siama Ali’s amazing ‘William & Kate’ cake. And he thought the picture of him as a baby was Charlotte ‘our little Lottie’ he said, pointing it out to Kate. @cupcakerbradford on Insta, check it out!”

In the short clip William can be seen pointing at the image and saying: “Is that me? Is that me?” Before saying to Catherine: “It looks so much like Charlotte … Our little Lottie.”

Watch 👇🏻William was “wowed” when he saw Siama Ali’s amazing “William & Kate” cake. And he thought the picture of him as a baby was Charlotte “our little Lottie” he said, pointing it out to Kate. @cupcakerbradford on Insta, check it out! pic.twitter.com/4Yc2BeHljg

Fans of the Cambridges were quick to comment on the video, with one person saying: “Amazing. William favours his mum maybe Charlotte will favour her grandma as she grows.”

Another commented: “That discussion of who Charlotte takes after is now officially closed. She’s a Spencer like her daddy.” While another said: “I’ve always thought she had a resemblance of him but i didn’t realise the resemblance was strong.”

Meanwhile, another Twitter user shared the photo that apparently caused the confusion, and the striking resemblance between father and daughter is clear.

It’s not the first time that young Princess Charlotte has been compared to one of her royal relatives as she is often said to resemble the Queen, while others have compared her to Prince William’s cousin Lady Kitty Spencer.

The 29-year-old niece of Princess Diana sparked a debate last year when she shared a throwback photo from her childhood on Instagram. The adorable snap showed Kitty, whose father is Earl Spencer, sitting astride a white pony as she looks over her shoulder into the distance.

It sparked a flurry of comments from royal fans who couldn’t believe how much she looked like the young princess. One fan wrote: “You look exactly like Charlotte.” While another commented: “Like Charlotte Cambridge.” And a third said: “Gosh you look like Princess Charlotte here.”

Kitty shared the image in the lead up to the Melbourne Cup and captioned it: “Lexus Melbourne Cup here we come!! Channelling my inner jockey since 1992!”

Can you see the resemblance? Who do you think Princess Charlotte most looks like?