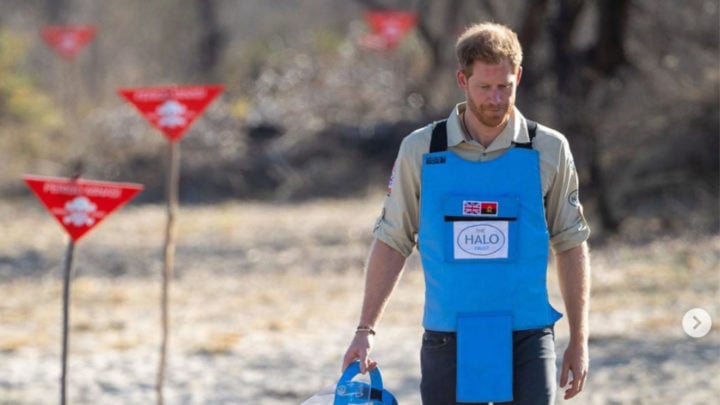 Prince Harry visited Angola where his mother Princess Diana had been 22 years ago. Source: Instagram/ The Royal Family

Prince Harry has followed in his mother Princess Diana’s lead and retraced her footsteps during a visit to the sites of former minefields in Angola as part of his trip to Africa.

Walking through the very same area that his mum did 22 years ago, the young royal paid homage to Diana’s anti-landmine work, wearing matching protective gear and even helping to destroy one of the mines. With a blue splinter vest and visor to keep him safe, Harry looked strikingly similar to his mum and the famous photos that were captured of her in 1997.

Speaking about the experience in a video shared on Instagram, the 35-year-old said it has been an emotional journey to continue his mother’s work and see how far the community has come over the years. Footage showed what was once an active minefield had been transformed into a place of joy and happiness with schools, colleges and small businesses.

“It’s incredibly emotional to follow in the footsteps of my mother… If 20 years ago she hadn’t done what she did, this would still be a minefield. To see this as a thriving community is amazing.” – The Duke of Sussex Above, some words from The Duke of Sussex as he spoke candidly today about his experience retracing his mother’s visit to Angola in 1997. He was able to see firsthand more of the legacy she left on the world. Princess Diana brought global attention to the issue of landmines and helped change the future for this community in Huambo, and many more like it. This afternoon, 22 years later, The Duke was able to walk the same path, but now rather than walking amongst mines, he was able to walk among a bustling community with schools, colleges and small businesses. Earlier today The Duke joined @thehalotrust to once again highlight the issue of landmines that still threatens more than 60 million people worldwide. #RoyalVisitAngola Video © SussexRoyal

“It’s incredibly emotional to follow in the footsteps of my mother … if 20 years ago she hadn’t done what she did, this would still be a minefield,” he explained. “To see this as a thriving community is amazing.”

While there the duke learnt about the work of The Halo Trust and their goal to clear the site of land mines by next month. Harry’s passion for the cause has carried on over many years as an advocate for the elimination of threat posed by landmines in the region.

In April 2017, the prince launched the Landmine Free 2025 campaign in collaboration with The Halo Trust and the Mines Advisory Group. Seeing his determination to follow on Diana’s mission to create a safe community, royal fans have expressed their love and support of Harry.

The Duke of Sussex has visited a partially cleared minefield in Dirico, Angola; following in the footsteps of his late mother, Diana, Princess of Wales. The Duke joined @thehalotrust in their work to help clear the area to enable safe access for the local community. His Royal Highness set off a controlled explosion to destroy a landmine. The Duke learnt about the work of The Halo Trust and their goal to clear this particular area of land mines by October 2019. In 1997, Diana, Princess of Wales visited Huambo to bring global attention to the threat of landmines and the people whose lives were being destroyed. The area is now transformed. A small community, with colleges, schools and businesses occupies the once uninhabitable area. His Royal Highness has been a strong advocate for eliminating the threat posed by landmines to some of the most vulnerable people around the world and continues the work undertaken by his mother. In April 2017, The Duke launched the Landmine Free 2025 campaign with @thehalotrust and @minesadvisorygroup #royalvisitangola

Hundreds flocked to social media after seeing the newly released photos of the young royal hard at work, commending Harry for using his time to help others. “Thank you Harry, for continuing the all important work of your treasured mother,” one person wrote on Instagram.

“Her courage and bravery just being in Angola at such a volatile time, and then to walk that dusty path that day, bringing the issue of land mines to the forefront and the tireless work she put in to having them banned never be forgotten. For you to now be retracing her footsteps, on what was once a minefield, and is now a road in a vibrant area to where this iconic photo of her was taken, will be bittersweet for you, I’m sure.”

Meanwhile, another wrote: “Diana is smiling, Harry’s done her legacy good.” And a third said: “Am I the only one crying? Because this is just beautiful.”

It has been a busy few days for Harry and his wife Meghan with the pair proudly showing off their adorable son Archie on his first public engagement during the royal tour. The sweet four-month-old tot flashed a beaming smile to the camera as he was carried by his doting mum to meet Archbishop Desmond Tutu in Cape Town.

Cradled in his mother’s arms, Archie appeared excited by the outing as he looked eagerly around him. Wearing light blue dungarees, Meghan and Harry chose to dress their son in a white long-sleeved top and matching socks. The couple shared the short clip on their Instagram Stories and captioned it: “Arch meets Archie.”

Tutu has battled prostate cancer for several years and is rarely seen anymore in public. However, speaking ahead of the royal visit, both he and his wife reportedly described the chance to meet Harry and Meghan as a “rare privilege and honour”.

Have you been following Prince Harry and Meghan's royal tour? What do you think of the work Harry is doing to continue his mum's work?