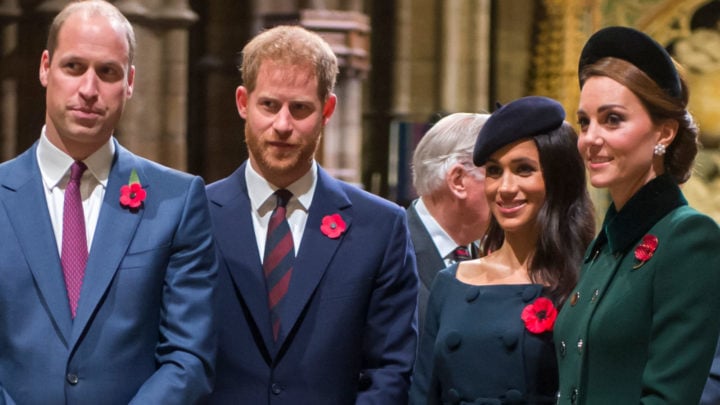 The royal foursome, pictured here in 2018, are set to reunite on Monday, March 9. Source: Getty.

The Duchess of Sussex is expected to touch on UK soil any day now, as she returns to the country to be reunited with her husband as the pair carry out their final engagements as high-ranking members of the British royal family.

This week Meghan is set to make her first public appearance on behalf of Her Majesty the Queen since January, as it has been confirmed that the Sussexes will attend the Endeavour Fund Awards on March 5. The duchess will then make a series of other small appearances in the days that follow, before she and Harry step out for the final time as representatives of the monarch on Monday, March 9.

It had been highly anticipated that the duke and duchess would mark Commonwealth Day in some capacity whilst they were in the UK and now, Buckingham Palace has confirmed that Harry and Meghan will indeed attend the annual service at Westminster Abbey, which will see them reunited with the Duke and Duchess of Cambridge.

Royal reporter Richard Palmer confirmed the news on Monday evening, as he revealed that a palace spokesperson had confirmed their attendance at the ceremony. He wrote: “They will join the Queen, Charles and Camilla, and the Cambridges at the service.”

A last hurrah. Confirmation from Buckingham Palace that both the Duke and Duchess of Sussex will be at the Commonwealth Day service at Westminster Abbey on March 9. They will join the Queen, Charles and Camilla, and the Cambridges at the service.

The engagement is thought to be the last that Harry and Meghan will undertake as senior members of the royal family, before the terms of their deal with Buckingham Palace, allowing them to “take a step back”, come into effect on March 31.

Meghan is due to return to the United Kingdom this week, having remained in Canada despite Prince Harry returning home last week to carry out a number of engagements, which included taking part in a recording session with musician Jon Bon Jovi who has penned a new song in support of the prince’s Invictus Games charity.

Earlier this week it was reported that Meghan had upset the Queen with her decision not to bring 10-month-old baby Archie along with her, instead leaving the royal tot in Canada under the care of the Sussexes nanny and the duchess’ close friend Jessica Mulroney.

According to the Sunday Times, Queen Elizabeth II – who has not been able to spend much time with her youngest great-grandchild and was last photographed with him last May when the couple debuted their newborn son to the world – was saddened by the decision.

The news outlet reported that the Queen, and extended royal family, is said to be “very sad” that Archie is staying behind on Vancouver Island in Canada, whilst Harry and Meghan wrap up things in the UK.

Are you a fan of the royal family? Do you think Harry and Meghan made the right decision to take a step back?