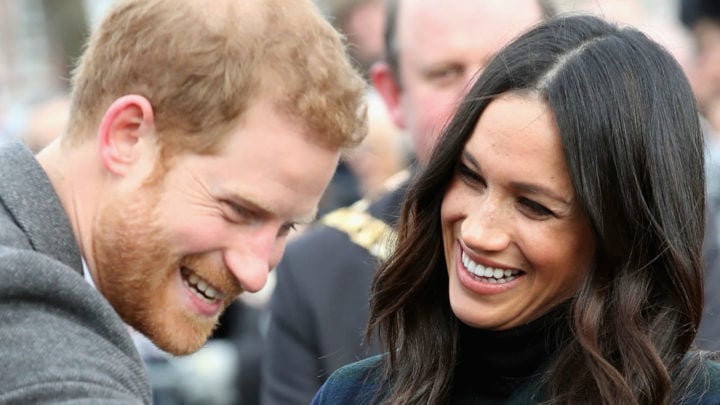 The Duke and Duchess of Sussex launched the website for their new charitable organisation Archewell. Source: Getty.

Prince Harry and the Duchess of Sussex suffered an embarrassing public gaffe this week as they unveiled their new charitable organisation Archewell, which will replace their Sussex Royal Foundation now that they’re no longer senior royals.

After confirming the news to British publication The Telegraph, fans of the couple rushed online to learn more about the Sussexes’ future plans and the causes they’re planning to support as they start afresh away from the confines of the royal family. However, until very recently, those who typed archewellfoundation.com into their browsers were instead diverted to a very different web page.

It seems the couple had failed to register the likely domain, ahead of launching their official Archewell website, leaving it open to Internet pranksters who were quick to seize the opportunity. So, rather than seeing information about Harry and Meghan’s charitable work, users were automatically directed to a page displaying the music video for Kanye West’s song ‘Gold Digger’.

The 2005 hit song is about a woman who dates men for their wealth and features lyrics such as: “Now I ain’t sayin’ she a gold digger … But she ain’t messin’ with no broke, broke.” [sic]

People were quick to notice the gaffe, which seems to have since been corrected as the domain is now unavailable. One eagle-eyed person wrote on Twitter: “Uh oh. As of 7 April, if you enter in archewellfoundation.com in your browser, it actually links to Kanye West’s – Gold Digger video on YouTube.”

While another commented: “So. Meghan and Harry leave the UK to raise their son in privacy. They move to LA. No we aren’t going to launch a foundation. 2 wks later they announce The Archewell Foundation. If u type archewellfoundation.com YouTube plays Golddigger by Kanye West. Hilarious. 10/10.” [sic]

Uh oh. As of 7 April, if you enter in https://t.co/4cgvsLoEry in your browser, it actually links to Kanye West's – Gold Digger video on YouTube. 😬 #HarryandMeghan #MeghanMarkle #PrinceHarry #Archewell

Harry and Meghan, who recently relocated to Los Angeles with their young son Archie Harrison Mountbatten-Windsor, confirmed the news this week as they told The Telegraph they are in the process of creating their own organisation which they want “to do something of meaning”.

“Like you, our focus is on supporting efforts to tackle the global COVID-19 pandemic but faced with this information coming to light, we felt compelled to share the story of how this came to be,” they said in a statement, supplied to the newspaper.

Their latest project also includes a sweet nod to Harry and Meghan’s only child as it will reportedly operate under the name ‘Archewell’, derived from the Greek word Arche which means “source of action” and was reportedly the inspiration behind the name of their 11-month-old baby boy.

The statement continued: “Archewell is a name that combines an ancient word for strength and action, and another that evokes the deep resources we each must draw upon. We look forward to launching Archewell when the time is right.”

The project will replace their Sussex Royal Foundation, which was sidelined after Harry’s grandmother Queen Elizabeth II reportedly banned the couple from using the word “royal” to market themselves. It will include their own charity, volunteering service and wide-ranging website, according to The Telegraph, who obtained copies of paperwork filed by the couple in the United States last month, ahead of their official date of departure from the royal family.

Do you think Harry and Meghan made the right decision to step back as senior royals?