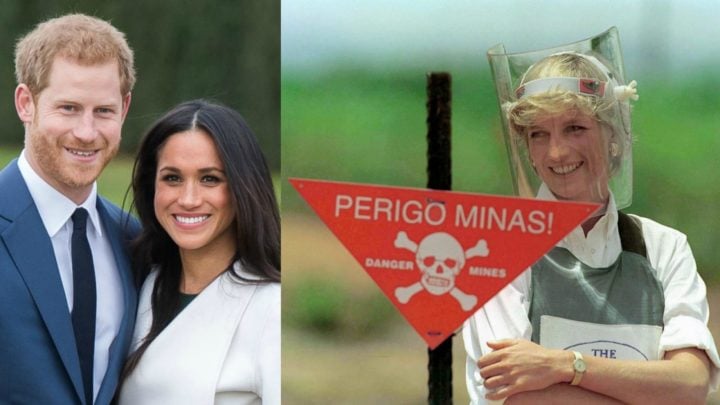 Prince Harry and Meghan will reportedly continue the work of the late Princess Diana during a trip to Africa later this year. Source: Getty

Prince Harry will follow in the footsteps of his late mother Princess Diana and travel to Africa to continue her work on landmines alongside his wife Meghan, it has been claimed.

The young royal will continue his mum’s legacy by visiting the country of Angola in central Africa as part of his Autumn royal tour with the Duchess of Sussex, The Mirror reports.

He will tour the very place Diana visited in January 1997, where she was famously photographed wearing a protective visor and vest as she walked through a minefield – just months before her tragic death.

According to The Mirror it has not yet been confirmed whether new mum Meghan and son Archie will join Harry for that part of the trip, with palace aids currently investigating security in Angola.

However, it’s reported that the three will travel together for parts of the tour including a visit to Malawi where they plan to work on expanding the programs provided by the duke’s charity Sentebale.

The charity was first created by the prince in 2016 with an aim to support the mental health and wellbeing of young people affected by HIV in Lesotho and Botswana.

Harry has previously spoken out about his late mother’s work overseas and how, while some didn’t agree with her actions, Diana simply wanted to help the people of Africa.

Speaking on International Mine Awareness Day in 2017, The Mirror reports he said: “Some believed she had stepped over the line into the arena of political campaigning – but for her this wasn’t about politics; it was about people.

“She knew she had a big spotlight to shine and she used it to bring attention on the people that others had forgotten, ignored or were too afraid to support.”

The upcoming trip won’t be the first time the couple have travelled to Africa together, with them spending time in Botswana in August 2017, just three months before their engagement was announced by Buckingham Palace.

Earlier this year the pair shared some never-before-seen snaps from the special trip on their Instagram account showcasing their time together in the African country.

The Duke of Sussex attends the ‘Our Planet’ premiere at the Natural History Museum with The Prince of Wales and The Duke of Cambridge, lending their joint support for the protection of our environment. As president of @africanparksnetwork, The Duke of Sussex continues to advocate for the communities and wildlife that coexist in some of the most vulnerable environments around the world. Be it human wildlife conflict or natural disasters, these communities (park rangers, school children, families) are on the frontline of conservation and we must do more to help them as we also work to safeguard the animals and landscapes that are in critical danger. A few recent photos that look back on: Prince Harry’s long time commitment to this cause as well as a glimpse into the work he and The Duchess of Sussex did in 2017. Their Royal Highnesses travelled to Botswana to assist Dr. Mike Chase of Elephants Without Borders in equipping a bull elephant with a satellite collar. Approximately 100 elephants are poached/killed every day for their ivory tusks. Using satellite technology allows conservationists to track their critical migratory patterns and to protect them and the local communities from human wildlife conflict. The elephant pictured was sedated for just 10 minutes before he was up and back with his herd. Tracking his movements has allowed conservationists to better protect him and other elephants and ensure heightened protection for these beautiful creatures moving forward. Photo credit: PA, Image 1

The young royals also revealed previously unknown details of their trip and the conservation work they undertook in a lengthy caption, which was shared alongside the series of photographs.

“As president of @africanparksnetwork, the Duke of Sussex continues to advocate for the communities and wildlife that coexist in some of the most vulnerable environments around the world,” the post read.

“Be it human wildlife conflict or natural disasters, these communities (park rangers, school children, families) are on the frontline of conservation and we must do more to help them as we also work to safeguard the animals and landscapes that are in critical danger.”

Do you remember when Princess Diana visited the minefield? What do you think of the work Prince Harry and Meghan do to help others?