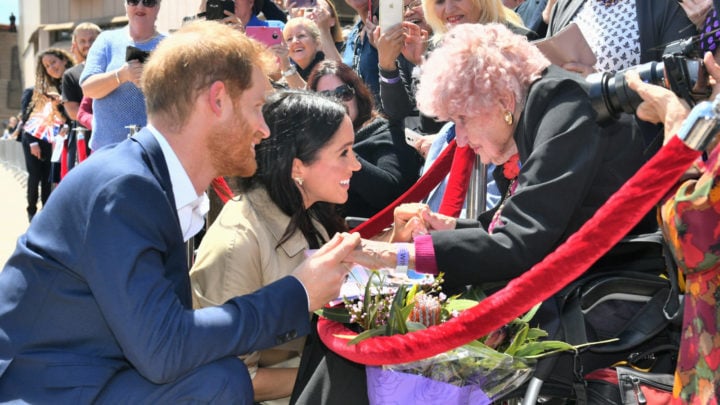 Daphne Dunne was labelled Prince Harry's biggest fan having met him several times on his visits to Australia. Source: Getty

The daughter of Prince Harry’s ‘biggest fan’ Daphne Dunne says her mother would have approved of the royal’s decision to step down from senior duties with the family.

Daphne Dunne captured Harry’s heart on his trips to the Land Down Under, even stealing several kisses from the prince over the years.

The pair first caught each other’s eye in May 2015, when Prince Harry dressed in military uniform, met the war widow during a walkabout in Sydney, whilst she was wearing her husband’s Victoria Cross medal.

Over time, and on Harry’s subsequent visits to Australia, their friendship blossomed with Daphne having the pleasure of meeting Meghan during the royal couple’s first visit to the country together.

Sadly, Daphne passed away early last year at the age of 99. But, her daughter Michelle Haywood said her mother would have supported Harry’s decision to forge a new lifestyle with wife Meghan and son Archie.

“First and foremost, mum would have been very accepting of their decision as she always wanted Prince Harry to be happy and to share his life with the person he chose to love,” she told The Daily Mail. “Mum wanted him to live his life to the fullest which he felt he could do with Meghan.”

Michelle said while duty was important to Daphne, who served in the Australian Army Women’s Service during World War II, love should always come first.

“Mum always said that ‘there’s more than one way to do things’ and she was not one to judge others,” the daughter explained. “However, I do think mum would have put her relationship first, as to find true love and keep true love is the most valuable gift and the essence of life.”

Prince Harry and Meghan shocked the world on Wednesday when they announced that they were stepping down from their position as senior members of the royal family, instead wishing to divide their time between the United Kingdom and North America.

The duke and duchess have marched to the beat of their own drum since tying the knot at Windsor Castle in May 2018 but their most recent announcement, which they made via their Sussex Royal Instagram page, came as a surprise to royal-watchers across the world, including, according to the BBC, the royal family who were unaware of the couple’s intentions.

In line with their bombshell statement, the couple also launched a brand new website which details their plans for life away from the palace including what financial assistance they will receive from Her Majesty the Queen, having claimed that they wish to become “financially independent”, as well as where they will live as a family of three.

Do you think Prince Harry and Meghan made the right decision?