Prince George smiles cheekily in new portrait alongside William, Charles and the Queen 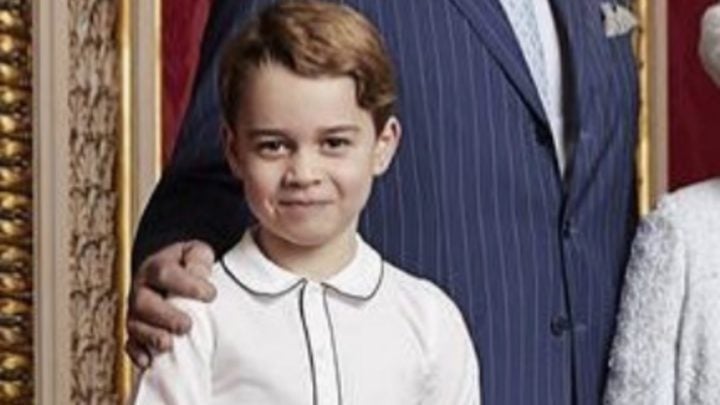 The rare photo has been released to mark the start of a new decade. Source: Instagram/Kensington Palace

Prince George can be seen smiling cheekily alongside his great-grandmother Queen Elizabeth, grandfather Prince Charles and father Prince William in a new portrait released by Buckingham Palace on Friday.

Her Majesty is closest to the camera in the image, wearing a white dress accessorised with a blue brooch and one of her iconic black Launer handbags. Charles and William are both smart in blue suits, while six-year-old Prince George wore a smart white long-sleeve shirt with blue piping for the occasion.

📸 To mark the start of a new decade, a portrait has been released of Her Majesty The Queen and Their Royal Highnesses The Prince of Wales, The Duke of Cambridge and Prince George.‬ The portrait was taken by Ranald Mackechnie in the Throne Room at Buckingham Palace. Photograph © Ranald Mackechnie

Many royal fans were quick to comment on the sweet photo, with one writing: “A great picture of four generations of the royals.” While another added: “This is so lovely to have our present and future heir to the thrones in one picture. So special.”

The photo, taken in the Throne Room at Buckingham Palace, marks just the second time that the 93-year-old monarch, Charles, William and George have appeared together for an official portrait. The first official portrait of the group was released in honor of the Queen’s 90th birthday in April 2016. At the time, Prince George was only two-years-old.

Meanwhile, it comes after the cheeky royal and his sister Princess Charlotte completely stole the show at the royal family’s Christmas Day church service last week. Everyone from Prince Charles to Princess Eugenie and Princess Anne took part in the royal family’s annual walk to church, but it’s safe to say all eyes were on the Cambridge kids as they made their debut at the service.

Photos of Prince George and Princess Charlotte, 4, flooded news feeds across the globe after the two walked alongside their parents, Prince William and Catherine. For the occasion, George wore a navy suit, while Charlotte looked festive in a green coat.