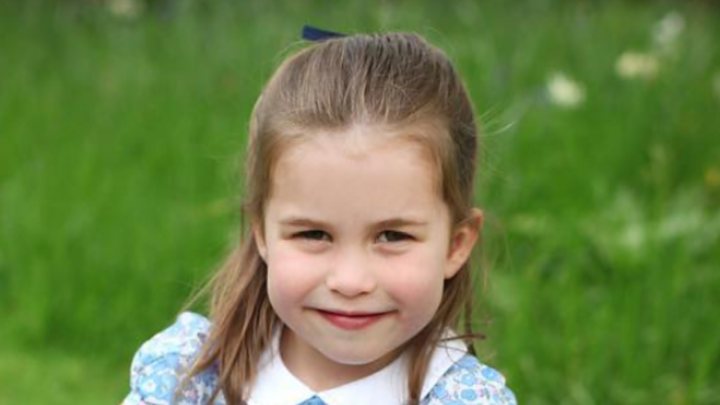 The royal family has delighted fans with the release of three new adorable photos of Princess Charlotte to mark her fourth birthday.

Snaps taken by the Duchess of Cambridge were published on social media on Wednesday (UK time) in celebration of her only daughter’s special day on May 2.

The beautiful images show the gorgeous little girl playing outside – and she looks remarkably like her father Prince William.

The posts were simply captioned: “The Duke and Duchess of Cambridge are very pleased to share three new photographs of Princess Charlotte ahead of her fourth birthday.

“The photographs were taken in April by The Duchess at Kensington Palace and at their home in Norfolk.”

In one image Charlotte can be seen sitting on a fence with a cheeky smile on her face, wearing a cute grey cardigan and a tartan skirt.

Another shows the young princess happily running outside carrying a flower in her hand. While in a third Charlotte sits comfortably on the grass in a pretty blue patterned dress.

Royal fans were quick to comment, leaving lovely message for William and Kate’s daughter on the exciting day.

“My favourite picture of her! She looks gorgeous,” one person wrote on Instagram.

The Duke and Duchess of Cambridge are very pleased to share three new photographs of Princess Charlotte ahead of her fourth birthday. The photographs were taken in April by The Duchess at Kensington Palace and at their home in Norfolk.

The release of the new snaps comes just weeks after the family celebrated little Louis first birthday. Prince William and Catherine shared a series of unseen photographs of their youngest child via the Kensington Royal Instagram page in April. Catherine took the pictures herself and showed off her photography skills in the shots.

In the first two photos, little Louis could be seen grinning from ear to ear in the garden. The fifth in the line of succession to the British throne looked cute as a button in a maroon jumper and smart pair of trousers.

The Duke and Duchess of Cambridge are delighted to share these new photographs of Prince Louis ahead of his first birthday tomorrow 🎈 The photographs were taken earlier this month by The Duchess at their home in Norfolk.‬

In the second photo, a handsome Louis posed in a knitted blue jumper featuring a picture of a dog and a smart coloured shirt.

Fans couldn’t get enough of the new photos of the young prince, with many claiming he was a spitting image of his father and his older brother.

One person wrote: “He has an adorable smile.”

Happy Birthday Prince Louis! 🎉 The Duke and Duchess of Cambridge are delighted to share this new photograph of Prince Louis ahead of his first birthday tomorrow.

Another comment read: “Congratulations on your First birthday Prince Louis!”

A third added: “Can’t believe he is already a year old. He looks so much like his siblings.”

Are you a fan of the royal family? What do you think of the new photos? Do you have a birthday message for the young princess?