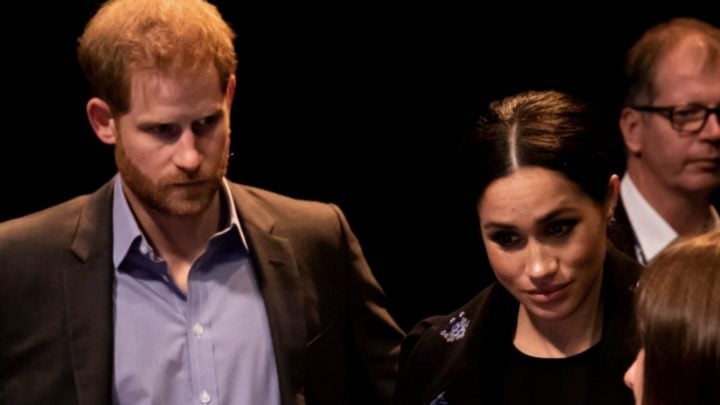 While the Duchess of Sussex enjoys her first week as a mother, and no doubt some much needed rest, the palace have released a series of previously unseen photographs to mark the launch of a brand new initiative, supported by the new parents.

The never-before-seen photos show the Duke and Duchess of Sussex visiting UK charity Shout in November last year, just weeks after it was announced that Meghan was expecting the couple’s first child.

In the photos shared on social media, Meghan can be seen wearing a black coat decorated with a pretty blue floral design, which she paired with an understated black top and leather-look pants for the occasion.

The new-mother wore her hair scraped back into a casual ponytail for the unofficial outing and stuck to her signature make-up look, with a lick of dark eyeliner. While Prince Harry, who is currently in the Netherlands to launch the countdown to the Invictus Games, donned a black suit with a blue shirt, open at the neck.

Following Archie Harrison’s birth on Monday, the palace announced on Friday that the Prince Harry and Meghan had teamed up with the Duke and Duchess of Cambridge to work on the initiative, which is the UK’s first 24-hour text support service that connects people in need to trained volunteers who help calm them, plan their next steps and find longer-term support.

A caption on the duke and duchess’ official Instagram account read: “Earlier last year, The Duke and Duchess of Sussex began supporting this vital program behind the scenes by hosting a meeting at Kensington Palace with contributors and partners.

“Last November, Their Royal Highnesses also made a surprise visit to meet with a group of Shout volunteers … hearing firsthand how the volunteers have found making the connection with vulnerable texters, a majority of whom are under 25, so rewarding.”

We were thrilled to welcome The Duke and Duchess of Sussex to our #Volunteer event in November where The Duke of Sussex encouraged everyone to spread the word about #volunteering with Shout. #GiveUsAShout

The project also marks the first time that the Sussexes and the Cambridges have united to work together since splitting households in March, which coincided with Meghan and Harry’s move to Frogmore Cottage.

Today The Duke and Duchess of Sussex are delighted to share their first public moment as a family. They are so incredibly grateful for the warm wishes and support they’ve received from everyone around the world, since welcoming their son two days ago. Photo cred: Chris Allerton ©️SussexRoyal

Earlier this week the world got its first glimpse at the newest member of the British royal family as the proud couple invited select members of the media to Windsor Castle to take the very first public photos of Master Archie Harrison Mountbatten-Windsor.

Meghan looked incredible in a white shirt dress, just two days after giving birth to their first child, and told reporters she had the “two best guys in the world”.

Prince Harry could barely hide his pride as he cradled his newborn son, telling the media that he doesn’t know who Archie Harrison gets his “calm temperament” from, as the tiny tot slept soundly throughout the photo op.

What are your thoughts on this story? Do you think it’s nice to see the Sussexes and the Cambridges working together?