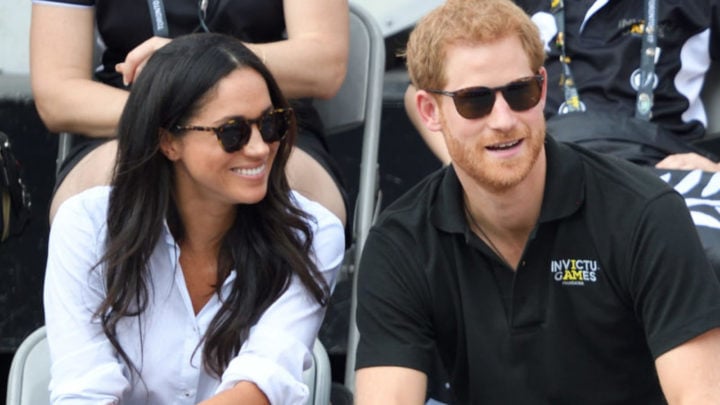 Rourke said his favourite trip was to the Invictus Games in Toronto in 2017. Source: Getty.

The world is waiting with baited breath for the announcement that the Duke and Duchess of Sussex have welcomed their first child, and now a royal photographer who has worked closely with the parents-to-be has revealed what to expect from the first photo of the newest member of royalty.

Tim Rooke has followed the royal couple around the world on various official engagements, ranging from days out at home in the UK to their tour of Australia, New Zealand and the Pacific Islands last year.

And, having witnessed the couple up close, noting how “affectionate” they are with each other, Rooke has revealed what path he thinks Meghan and Prince Harry will take when it comes to revealing their new bundle of joy to the world, reports The Daily Mail.

“We now know that Harry and Meghan will not have a traditional post-birth photo call, which definitely goes against the norm,” he said.

“Given that the couple have recently created an Instagram page to document their activities it’s more likely that the first image of Baby Sussex will be posted and shared widely to the public via Instagram.”

While it is likely he won’t get to photograph Baby Sussex for some time after he or she is born, Rooke has previously snapped photographs at the debut of other royals, including Prince George and Princess Charlotte.

Rooke also revealed that, ahead of the birth of Princess Charlotte in 2015, photographers from major media outlets were invited to a meeting with the palace to confirm the logistics of shooting the event, revealing they were not allowed to attend the hospital until Catherine had actually been admitted.

Earlier this month the palace released an official statement, confirming that the duke and duchess would remain private about the birth of their child, with Meghan opting to ditch the famous photo-op on the hospital steps – which has been carried out by both the Duchess of Cambridge and Princess Diana over the years.

The statement, which was shared online by British royal reporter Chris Ship, also made no mention of which hospital the duchess would be giving birth in, with unconfirmed reports suggesting that Meghan would prefer to have a home birth.

“The Duke and Duchess of Sussex are very grateful for the goodwill they have received from people throughout the United Kingdom and around the world as they prepare to welcome their baby,” it read.

“Their Royal Highnesses have taken a personal decision to keep the plans around the arrival of their baby private. The Duke and Duchess look forward to sharing the exciting news with everyone once they have had an opportunity to celebrate privately as a new family.”

Are you a fan of the Duke and Duchess of Sussex? Are you excited about the birth of the royal baby?